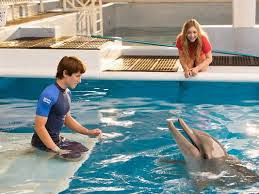 Obviously any movie that includes a number means it's a sequel to a previous film of the same name. In this case, it's 2011's Dolphin Tale. Reprising their roles the kids in the first movie are now teenagers, the Clearwater Marine Aquarium which was on the verge of closing is now expanding and successful, and the amputee dolphin Winter is still the star of the show. Written and directed by Charles Martin Smith, the film still carries a heavy faith based agenda, but it manages to offer some character development with the themes of growing up and letting go.

Sawyer (Nathan Gamble) has been offered a scholarship to special program on a tall ship studying marine life. It's a one chance opportunity that shouldn't be missed. However, Sawyer is worried about Winter who has been acting strangely. Her longtime companion dolphin has just passed, and Mandy who they had hoped to pair with Winter is rehabbed enough to be sent back to the wild. If they can't “fix” Winter, she will have to be transferred to another facility according to the USDA inspector. The sea life rescue operations are featured in detail as the aquarium volunteers saves a young motherless dolphin who they name Hope. Hopefully they will be able to introduce her to Winter so they can bond.

Ashley Judd is back as Sawyer's mom who offers sage advise, and tries to urge her son to accept the scholarship. Harry Connick Jr is the noble aquarium vet, Dr. Clay Haskett and the father of Hazel (Cozi Zuehlsdorff), Sawyer's best friend. Morgan Freeman as Dr. Cameron McCarthy lends the production some class as the designer of Winter's prosthetic tail. And blink and you might miss him Kris Kristofferson as Hazel's grandfather. Bethany Hamilton, the real life surfer who lost her arm to a shark, plays herself as does Winter who both offer role model inspiration to all the amputee's that come in buses to witness the miracle of tail less dolphin.

The movie is quiet and easy paced when compared to other kids animated movies that color bomb your brain and it's headache inducing high pitched voiced characters. Dolphin Tale 2 offers a view behind the scenes of an aquarium with it's dedicated volunteers that help it run and the training they must undertake. Emphasis is on the goal of the aquarium to rescue, rehabilitate and release wild life and when necessary by offering medical assistance. The scenes with the dolphins are assisted with some aminatronics and visual effects. The scene stealing Pelican is a nice sub plot with him stalking a sea turtle that is rescued. Over all a good family picture, if you don't mind nothing much happening.
(Review by reesa)