The Forgotten Four: The Integration of Pro Football 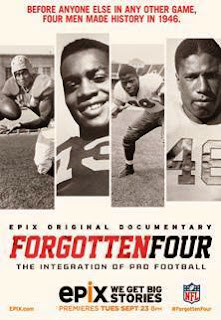 When the first football league was formed in 1921, it was becoming a growing obsession in America. African Americans were able to distinguish themselves on the field. It wasn't until 1933 at the owners meeting that the color line became enforced. George Preston Marshall who had brought the half time show and team mascots to football was unfortunately also a bigot and the leading opponent at keeping Americans of color out of the game. Kenny Washington was a star player in 1936 at UCLA where he played with Woody Strode and Jackie Robinson. They were the powerhouses of their team. Washington and Strode were known as the Golddust Twins. But as good as they were on the team, they still had to endure being ostracized by the prejudice that was prevalent of the times. Washington even played on the all star team where he got a touch down. All the players on this team were drafted except for him. After college, he went on to join the police and played with the minor league team the LA Bears.

In 1941, Paul Brown was a teacher and coach from Ohio State that brought modern methods of training such as film, equipment and new plays. He also wanted win with the best players, which meant ability and not color. Bill Willis played for Ohio State and Marian Motley met Paul Brown when he played for the Navy team that Brown coached during the war years. Brown later on helped establish the American Football Conference with his Cleveland Browns in 1946. Willis had coached at an all black college before he joined the Browns. And Motley had become a steel worker after college before joining the team. The Browns went on the win the championship in 1946.

At the same time the Rams decided to move to Los Angeles to play at the LA Coliseum. Washington was not forgotten in LA and the Coliseum since it was city owned and not private told the Rams owner, Washington plays or you don't get the venue. Washington brought back Strode. But owner Dan Reeves was a racist and disliked the fact that Strode had married a Hawaiian woman which was considered a mixed couple. Washington was also mistreated on the team, and the coach had to keep him in the field in order to protect him for this fellow players. Washington stayed with the Rams for 3 seasons and then continued his career with the police. Strode played for 1 season and became an actor.

Times have certainly changed and in thanks to the young men who were willing to endure the ignorant mindset of the times. The shameful legacy of racism that is slowly, maybe too slowly, being erased due to these brave men who were able to keep playing and exhibit their talent for the game. Jackie Robinson is probably the best known black athlete that broke the color line in baseball, but if it wasn't for the four men in football, he probably would have not been given the chance.
(Review by reesa)

Email ThisBlogThis!Share to TwitterShare to FacebookShare to Pinterest
Labels: The Forgotten Four: The Integration of Pro Football review