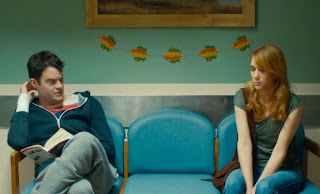 Kristin Wiig and Bill Hader are amazing at comedy, as well as having great timing; but can they really pull off drama? Wiig has done some films after “Bridesmaids” that were dramatic but never really garnered attention from fans or critics. Hader hasn’t done much after SNL, but whenever he is on screen, he has a presence. “The Skeleton Twins” shows us that they can both give us a subtle comedic, yet deeply dramatic performance. As stated, Wiig hasn’t really hit big with critics with her dramatic performances, but this one is her best work. The direction of this film shows us two deeply flawed characters, but you can’t help but root for them. The deep emotional scenes between all these characters make it more relatable as Wiig and Hader play brother and sister. I have a brother so I felt for them more, even if they made some bad decisions because we have all made bad decisions but our siblings have our backs. I have already praised Hader and Wiig, but a standout in this is Luke Wilson. He plays Wiig’s husband, and he just loves his life until they very end and it’s a huge shift in his character and I felt bad for him. I won’t tell you why as I don’t do spoilers. Wilson adds depth to his supporting role and he was great in it. The cinematography is nothing special, it’s shot well, but there is nothing to rave about. The film is about an hour and half and it coasts along as I didn’t feel anything slowing down. I was interested in these deeply flawed characters and how their lives, sometimes crappy, unfold. It was like seeing a real sibling couple with real life problems and that is one of the best compliments you can give a movie; it felt real. This was a surprising movie with great performances and interesting characters. Kristin Wiig and Bill Hader, if you read this, keep doing drama and comedy; you are great at both. 7/10
(Review by Chase Lee)