The Maze Runner and Cast Interview 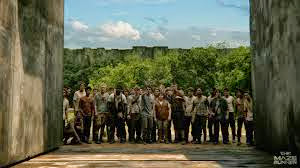 Another YA, young adult, post apocalyptic novel has made it to the big screen. This time around based on James Dashner's science fiction trilogy which means we can expect 2 (or 3) more films in this series. What makes this different than the Mockingjay or Divergent movies, is that the teens are not so much filled with romantic angst or set on killing each other. There is a little bit of Lord of the Flies going on, but the story is mostly leaning towards survival in a world where the inhabitants have lost their memories of their previous lives. The film is directed by Wes Ball and written by Noah Oppenheim, Grant Pierce Myers, and T.S. Nolin. For book purists there are some changes from the source material, but nothing that takes away from the main story. For those who haven't read the book, don't worry, it's just as enjoyable as an adventure story.

The film opens when a young man Thomas (Dylan O'Brien) is stuck in a cage elevator that seems to be going up. He's clueless as to why he is there, where he going, and who the heck he is. When the cage arrives at it's destination he is surrounded by a group of young men just like him, teens of various ages, sizes and colors. The place is called The Glade. They have all experienced the same thing. A new person has been sent to the Glade every month with a few supplies for the past couple of years. They have learned to build a society of sorts after a few months. They are lead by Alby (Ami Ammen) who was the first to arrive. The Glade is surrounded by a huge wall on all four sides. This is called The Maze. No one has ever survived a night in the Maze. That is when the Grievers come out. If you are stung by a Griever, your memory comes back, but it also makes you crazy.

Alby is the first to notice that Thomas is not your ordinary recruit to the Glades. He's curious, and single minded in his desire to leave. Some members of The Glade like Gally (Will Poulter) thinks it's better to stay where they are and stay safe. Events come to head when an unexpected arrival shows up in the cage and it's a young woman, Teresa (Kaya Scodelario) who has a note on her saying she is the last. Now Thomas is determined to figure a way out. He joins the “runners” lead by Minho (Lee Ki-hong) who have been mapping the labyrinth with others for years. What makes it difficult is the walls move into different configurations every day. The door to the Maze closes each night to keep The Glade safe from the night moving Grievers.

This will no doubt span video games as the escape is filled with one crisis after another. The special effects are riveting with the moving walls and the spider like mechanical and flesh Grievers. For this young adult genre, it's probably the best one going out there. The action scenes and the dynamics of the characters will make this a franchise that will be worth watching in the future.
(Review by reesa)

Round table interview with Dylan O'Brien, Kaya Scolelario, and Will Poulter at the ZaZa Hotel.