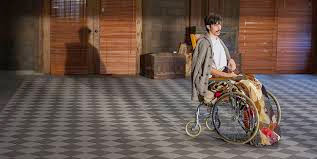 Disturbing, but in a funny way, would be the best word to describe writer/director Kevin Smith's new movie. Based on a listing from a UK Craigslist type website from a guy who had been lost at sea with his only companion being a walrus that he named Gregory. He was offering free lodging for someone to wear a walrus suit and make walrus noises while he throws him fish and crabs. The listing was perfect fodder for Smith's podcast. The story stayed with him and he eventually turned the story into a horror comedy that is also filled with social commentary.

Wallace Bryton (Justin Long) and Teddy Craft (Haley Joel Osment) are obnoxious podcasters for their show called the Not See Party (get it?). They come across this viral video from Manitoba and Wallace decides to take a road trip so he can interview him. Unfortunately the kid passed away, and now Wallace is stuck in Canada with nothing for his show. A flyer on the bathroom wall offered him an idea when it advertises free room and board to someone who will listen to an old man's seafaring stories before he dies. Wallace drives to the middle of nowhere and meets Howard Howe (Michael Parks) who is the most gracious host telling Wallace some amazing tales. Especially the one where he was lost at sea and ended up on a deserted island where only a walrus, which he named Tusk, for his companion. This is where the drugged tea that he fed Wallace takes effect. Wallace wakes up in a wheel chair and his leg is missing. Howe blithely explains he got bit by a recluse and it had to come off.

Howe confesses to Wallace that he must become a walrus because after all isn't man indeed a walrus in heart? Somehow Wallace finds his phone and quickly calls his girlfriend Ally (Genesis Rodriguez) and Teddy. They don't answer their phone because they are busy having an affair with each other. When they finally compare messages of a desperately sounding Wallace, they go to Canada to find him. They enlist the help of a Montreal ex-detective Guy Lapointe (Johnny Depp who is over the top and steals the movie) who has been investigating the disappearance of some young men whose body parts have only turned up.

The movie seems to be divided into two parts with time being spent with Lapointe telling Ally and Teddy's stories of his investigation. While Howe is giving Wallace long winded speeches on life and other endless rambles. Justin Long gives a believable performance as the jerk podcaster who was once a nice guy according to his long suffering girlfriend. But as the money and popularity of the show expanded, so did his personality that didn't know when to shut it down. It's also nice to see Osment back on screen and he's got the perfect voice for podcast, btw. There are some funny stuff especially when riffing off the differences between Canadians and Americans. Look for Smith and Depp's daughters in some small roles as store clerks. And there's some really good horror elements. It's just the ending that seems sort of a let down. But definitely worth a look.
(Review by reesa)