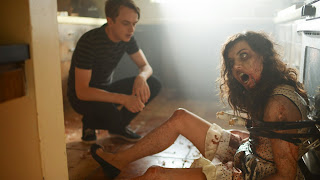 I haven’t really seen a good horror comedy since “Shaun of the Dead”, but this one came pretty close. This one follows Zach, played by Dane DeHaan, as he mourns the loss of his girlfriend Beth, played by Aubrey Plaza, but Beth comes back from the dead and the movie progresses. That is about it, but what made it work were the acting and the clever writing. The direction of the movie felt like a solid, horror comedy indie that I had fun with, just not too much fun. The tone was fine but I felt like the humor missed for the most, despite some really funny scenes. Most of the humorous scenes came from Plaza as she is known for comedy versus DeHaan who isn’t, but I still liked their chemistry on screen. The other actors, which include John C. Reilly and Molly Shannon, are a nice supporting cast and they add some humor but I felt like they could have been played by anyone.  The movie is shot well and has an apocalyptic feel and color pallet to it just
adding to the fun and quirky story. At its ninety-minute runtime, the movie flies by, as it is entertaining to watch. This is good, entertaining horror comedy with exceptional acting and an interesting story, sometimes funny, that spins something fresh on the horror comedy genre. However I have seen better in the genre, but if you like horror comedies I think you will like this one. 7/10
(Review by Chase Lee)