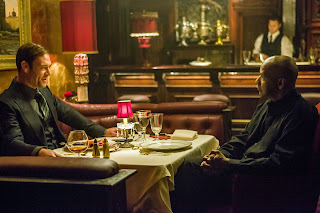 The television series of the same name ran for four years in the mid to late 80's starring Edward Woodward as the ex-government intelligence agent trying to atone for his sins. Training Day director Antoine Fuqua with writer Richard Wenk (Expendables 2 and The Mechanic) re-imagine the concept with what could possibly lead to a franchise. The movie will be successful no matter what because Denzel Washington headlines the cast. At the age of 60 he has a lived in body with a slight paunch around the middle and not some unnaturally pumped superhero. He radiates that mind first over action. But don't worry, there's plenty of action. It's a character type that he's played before, so not too many surprises.

Robert McCall (Denzel Washington) lives alone quietly in a sparse north Boston apartment where he times all his activities by his stop watch. Everything from brushing his teeth, to eating his dinner and washing dishes. He works at a Home Depot/Lowe's building supply store where he's quiet, unassuming and well liked by his co-workers. He mentors a pudgy clerk, Ralphie (Johnny Skourtis) who is trying to apply to become a store security guard. McCall is also an insomniac who when not sitting at home reading, takes his book and goes the local 24/7 diner for a cup of tea. He's precise in everything that he does including setting his book, napkin and spoon in a particular configuration. At the diner he has been encouraging prostitute Alina (Chloë Grace Moretz) to follow her dream of being a singer and to eat well. When Alina ends up in the hospital after her Russian pimp beats her up, McCall decides to buy Alina from the Russian mobsters.

The camera slows down when McCall is assessing the seemingly impossible situation in front of him. The first action sequence in the film is exciting and gruesome. Unfortunately for McCall is that he messed with the eastern hub of the Russian mafia leader Vladimir Pushkin (Vladimir Kulich). Pushkin sends in his number one henchman Teddy (Marton Csokas) who uses corrupt members of the Boston Police to investigate the deaths of the mobsters. Teddy is the classic sociopath villain, brutal, unforgiving and Csokas chews up the scenery at every sneer. He easily figures out McCall is not what he seems. McCall seeks out his past sources to dig up stuff on Teddy so it clears up some of his story.

The ending showdown complete with dramatic music is what to be expected and then some. Washington only engages in one fist-a-cuffs, but mostly relies on clever booby traps and there's a nail gun involved. There are some plot holes, but the movie moves along quickly so you don't think of it until later. By then you are willing to let it go because it's a satisfying 1 ½ hours spent at the IMAX.
(Review by reesa)

Email ThisBlogThis!Share to TwitterShare to FacebookShare to Pinterest
Labels: The Equalizer review