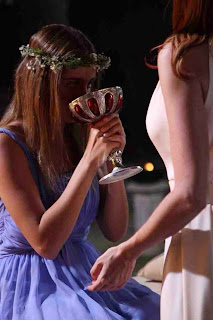 Innocence. Many of us long for a world where innocence in our young girls is valued and celebrated but in this self proclaimed supernatural, horror, thriller, romance, INNOCENCE just might get you killed. Beckett is a 16 year old shy and moody girl, who suffers several losses. She loses her beloved mother while surfing with her family in Montauk, loses her home 4 months later when her novelist father moved the two of them to New York City to a large and gorgeous apartment, and what friends she may have had when she starts school at an exclusive prep school, Hamilton, full of beautiful, perfect students from wealthy families. The school is too perfect like something out of Mansion Beautiful. The staff are too perfect, all appearing like former models in professional attire. It appears that Beckett has connections, too, in gaining such rapid admission to such an exclusive educational institution.
But quickly, we sense something sinister is up.

The staff are way too attentive to Beckett and her father. Too nice, too accommodating, creepy friendly and just a little too clicque-y. They even have a Hamilton book club (for the adults and alums, not the students). Even the board of directors is full of trophy wives who are too young looking to have teenagers at Hamilton. They may just be well preserved. The school has its own medication prescribing psychologist which turns out to be very convenient when a student decides to commit suicide and follow in the footsteps of two former students. Beckett begins to have hallucinations and weak spells that land her quickly on the couch and get her a quick pill prescription. Dad should be asking tons of questions but his attentions are being charmed away at home. Beckett only has eyes for Tobey, played by Graham Phillips and is on a one track mission to find her salvation in his eyes and arms. Who knows? He may have the "one thing" she needs to save her life from the coven at school and help her lose her innocence.

The dad, famous writer Miles Warner (Linus Roache), seems to care about what his daughter is going through but quickly adjust to his own loss by taking up with the school's runway model perfect nurse (Kelly Reilly) so we know he will be ok soon...... We know right away that Beckett is in danger amongst the towering, flowy- haired staff with their twinkling eyes and hushed conversations. Female Twihards, their mothers, and boys who love them (or think like them) will squeal at the budding romance that smacks a little too much like Twilight's Bella and Jacob.

The film is pretty, the dialogue super simple, the plot somewhat predictable, and the acting only fair to middlin. Screened at the Austin film festival almost a year ago, it has taken its sweet time getting to the big screen. Written and directed by Hilary Brougher and co-written by Tristine Skyler, it contains much pause and dead space as the continual emoting fills our eye. While the book by the same name that the film is based on (written in 2000 by Jane Mendelsohn) seems to have its fan base, one noted comment was "can't wait 2 see ur movie" tells us all we need to know. Movie info posted on RT tells us "INNOCENCE is a chilling allegory of the precarious state of an American teenager, explores themes of loss, the human condition and a society torn between purity and narcissism". I find this a very complex description of of a slightly vapid movie that is trying to take itself way too seriously. The ending is a bit silly and unfulfilling, but probably the only way it could resolve, and Beckett will need to adjust to even more loss. Most of us are simply to old or two young to really appreciate this effort.
(Review by Cheryl Wurtz)

Posted by Dallas Movie Screenings at 7:48 AM