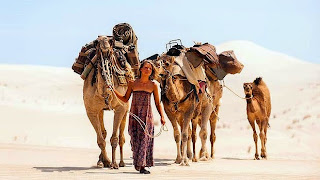 In today's world most everyone lives in a technological bubble. We rely on our cell phone, Internet, GPS's and television to get us through the day and connect with the world. Imagine being alone and in the middle of nowhere trekking through desert with only camels and a dog. Tracks is based on a true story by Robyn Davidson's of her adventure in 1977 on travelling by foot 1700 miles across eastern Australia from Alice Springs to Uluru on the Indian Ocean. Directed by John Curran (Painted Veil) working from a script by Marion Nelson, the film relies on the expressive face of it's star Mia Wasikowska. Considering that she really has no one to talk with during her journey, the camera must effectively captures her inner journey.

Robyn (Wasikowska) moved from the rat race of civilization to Alice Springs where she worked and lived for two years to learn how to train and handle wild camels. Camels were brought to the continent in 1840 for expeditions and then abandoned. Now Australia has the largest population of wild camels in the world. She became known as the Camel Lady and after her hard work with cameleers she acquired 3 camels and a calf, Dubs, Dookie, Zelly and Baby Goliath. To finance this trip she wrote a letter to the National Geographic Magazine who agreed to fund her expedition. They assigned a photographer, New Yorker Rick Smolan (Adam Driver), to meet up with her every 4-5 weeks and chronicle her journey. Rick is a bit of a hyperactive talking guy which at first reminds Robyn as to why she wants the solitude. Travelling at a pace of 20 miles per day, he is able to calculate when and where he would be able to connect with her.

Her walk takes her on the most forbidding, dry, hot territory. The countryside is is colored in burnt sienna, pinks, various shades of brown and tan. The land is either dry and cracked or variegated carpet of hardy green plants struggling to survive. At times windstorms created dusty whirligigs that threaten her supplies. With only drinking water carried by her camels, the dust and dirt is etched on her face and body. Sunburn, parched lips and the never ending drudgery of the endless miles makes her question her resolve. The ground is so hot that even the baby camel has trouble walking on it. She is usually just wrapped in a sarong that she uses as a scarf and ditches the pants. Some stretches she begins to lose faith and have hallucinations. And there were some parts where she travelled with an aboriginal “old fella” Mr. Eddy (Rolley Minutma) a respected elder who she needed to transverse across the Aboriginal sacred lands. Mr. Eddy didn't speak much English and chatted away in his native Pitjantjatjara.

Mia Waskikowska gives an riveting performance as the lone traveller. She trained with the real Robyn Davidson who showed her the ways of the camel. And Adam Driver as the dorky smitten photographer is perfectly cast. There's no political undercurrents and no social or environmental commentaries in the story. Robyn is given a little backstory concerning the death of her mother and her father had one time did a trek in East Africa. There are endless shots of miles and miles of viewing her squinty eyes and her dusty sandals, lumbering camels, wild bull camel attacks, nosey tourists and press encounters. And if anyone wonders why the heck would anyone want to endure such hardships? As the real Robyn Davidson replies, “why not?”
(Review by reesa)