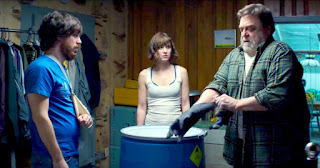 The 2008 “found footage” film Cloverfield came out to mixed reviews. People either loved it or hated it. Young folk running around New York City while recording their escape from an alien invasion. The new film written by Josh Campbell, Matt Stuecken and Damien Chazelle features the directorial debut of Dan Trachtenberg. It shares the same fictional universe as the first movie, but it's got a whole other thing going. Tense, suffocating, creepy thriller set in a bomb shelter with a conspiracy nut and a simple construction worker, the movie is seen through the eyes of young woman and her will to survive. Aliens? Seems like a better option than what's happening underground.

Mary Elizabeth Winstead plays Michelle who is running away from her live in love interest after they had a fight (voiced by Bradley Cooper). She is out in the country when her car is hit. When she wakes up, she finds herself in a brick walled room with her knee in a brace hand cuffed to the pipe on the wall. The strange noises emanating from outside of the room build up the suspense as well as her increasing paranoia. The man who abducted her is a survivalist Howard Stambler (John Goodman) who tells her he saved her life and a worldwide chemical attack has rendered the world uninhabitable. Obviously she finds this hard to believe just as Howard is adamant that they must stay in the bunker for at least a couple of years. He's got the place stored with food, water, generator and all the comforts of home. Emmet (John Gallagher, Jr.) verifies part of Howard's story. He helped Howard build the shelter. When he saw the “flash” he begged Howard to take him in, injuring his arm in the process. Howard tries to win her trust, but his antagonism with Emmet puts her off kilter. After her first escape attempt she finds that Howard may be right about what's happening outside. Howard has quick answers about the sounds of helicopters and machines moving around. Michelle decides to relax a bit and maybe accept her fate, until little clues begin to erode with Howard's story of his estranged daughter. The creep factor hits overdrive and the movie barrels over the waterfall with a hand gripping intensity.

John Goodman has never done better than this complex and resourceful survivalist. He's one moment kind and tender, then prissy and demanding, controlling with an explosive temper. Keeping Michelle on her toes, masking her dread with submissiveness, while she is hiding the chemical protection suit and gas mask she is building. Winstead shows some grit to her character trying to think ahead of the curve with her fight or flight response on automatic. Gallagher offers some southern charm and comedy to his role just by being thankful to be alive. This is nothing like the first Cloverfield movie thank goodness. It's absolutely worth the price of admission and the popcorn.
(Review by reesa)