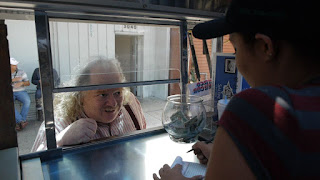 This amazing story of Pulitzer Prize-winner, food critic, Jonathan Gold who shared his flavor for Los Angeles food and culture. With his incredible talent in creating the right flow of words he helped countless of well deserve immigrant chefs to realize their dreams of success. He captured the audience with his unique talent of being a critic as he reviewed small restaurants and food establishments.

Jonathan Gold revealed his journey for being a good critic due his love for food and Los Angeles. During his early experience, he discovered his curiosity listing countless reasons for choosing these small vendors and small restaurants in some of the unusual areas of Los Angeles to write his reviews. He chose the under establishment cafes and places where he knew no one would ever rate their food. As an audience no would ever known these places existed without Jonathan Gold’s electrifying reviews. He let his readers know it was not about the fact that he had to love every single dish that he ate but he focused and wrote about the experiences in tasting food from their culture and respecting the culture in their natural form. When he wrote his reviews, it was as he was writing poetry. He knew many of these chefs and their establishments would never have a review considered in their neighbors. For the chefs and owners starting a food establishments during those times was not about getting a review but about surviving and keeping the family financially stable. Many of these small establishments had no renowned chefs. Many of them had never been to culinary school. Their only experience of being great cooks was passed down from parents and from generations of great cooks in their families. But the food was good. He took great pleasure in tasting simple dishes of food from Mexico, India and Vietnam and wrote about their food as if it was a work of art. Due to Gold’s review, many of those owner/chef were able to take advantage of the great reviews.

The directors did a thorough job of allowing not only Jonathan Gold to share his story but also allow some of the chefs to share their stories too. The storyline was not boring at it first appeared but it was very well written and kept the audience captivated. The editing and picture was distorted at time but it balanced out in the end. This was a good movie. The next time you see a food truck or small out of the way eatry, you may want to take a chance!
(Review by Dr. Dwanna Swan-Ary)

Posted by Dallas Movie Screenings at 8:24 AM