Batman Vs. Superman: Dawn of Justice 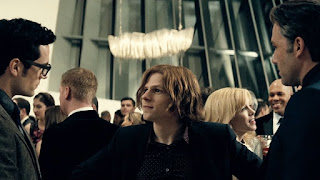 I went into Batman V Superman: Dawn of Justice with a wide open mind. Hadn’t read any reviews. Didn’t know any spoilers.  I am not a fangirl and don’t know all the storylines by heart, nor what is right on screen of terribly off.  That said, I settled in for a night of entertainment.  Both of our superheroes are on the low end of the public popularity scale. Superman’s collateral damage losses fighting General Zod from the previous film that centered on him and his rise to superhero we all know and love, with the Kansas upbringing and backstory.   I had no expectations. Nothing to disappoint.

I liked Brit Henry Cavill’s portrayal of the Caped Crusader in Man of Steel. It was more than adequate for the time but it appears that there was no desire to develop his character at all in this installment and that was a disappointment.  Batman has been portrayed by many over the years and the masses were looking forward to seeing what Ben Affleck would do with the role.  He is moody, broody and on a vigilante bent. He feels the need to torture those he interrogates now.  With the world populace fearing that Superman’s good deeds aren’t worth the corresponding death and massive property destruction that follows his saves, Batman seems to think he needs to take seek him out and teach him a lesson. Silly stuff.  Amy Adams is our new Lois Lane.  A smart, driven and professional reporter as always, she is in the Middle East, doing some scoop terrorist interviews when things go south and Superman must rescue her, but at more great loss. But they are a couple and in love and living together now.  Gotta take care of business at home first.  A new, crazier, more neurotic Lex Luthor (Jesse Eisenberg in a speed induced reincarnation of his Mark Zuckerberg role in The Social Network) is in the background, plotting and fretting about both of them and complicating and muddling the story line. Jesse is somewhat entertaining to watch, if you like watching insane people.  It is a different portrayal that may disappoint. A more adolescent and immature version of the Lexes we have seen before. He is going to change what is left of Zod into a newer, tougher, more indestructible foe for the duo to battle.  Imagine a foe that when energy is spent attacking it, it absorbs and grows even stronger.   There will be kryptonite.  Lex, Batman and lots of people want it. For good. For evil.  And yes, we get to see Bruce Wayne’s parents die all over again, and again. We get it. The kid is a little messed up now.   He mansion is a ruin and Robin is long gone. He has become a womanizing, brooding, dark dark man with few redeeming qualities.  Jeremy Irons give us our new Albert.  He doesn’t seem to serve much of a purpose other than someone to brood to.

Ok, so we know the duo are going to fight.  But the motives are just not strong enough for the showdown to take place. And what happens to the two does not happen for a good enough reason.  It is really really ridiculous.  Batman appears to just need a year or two of therapy at the first climax. Poor guy.  Then there is the new giant metamorphosized bad guy. The is a formidable foe but a pretty annoying one.   Wonder Woman (Gil Gadot) makes an appearance (to cheers and claps)to help battle the big black monster that growls, and the stage is set for the next two Justice League films where all the superheroes need to get together to fight the forces of evil.   Gotham and Metropolis are across the water from each other.  That feels strange.  Superman reconnects with his parents, in his mind and in person and shows us that he needs a little short term therapy too, but he did let his father die in the last film so he could remain anonymous. Holly Hunter (Senator Finch), Laurence Fishburne (Perry White), and Jeremy Irons  as Alfred are sadly underused. The Batmobile is a flat tank. I must admit the level of urban destruction during all of these battles is way over the top.  Billions lost as well as hundreds if not thousands of lives gone as a result.  That is not the old Superman and Batman I knew.  Bulls in china closets.

The music was cool, the effects over the top, the sound deafening, the brightness blinding,  the storyline disjointed and way too complicated to make total connected sense in the end. I think director Zack Snyder was really just trying too hard to fulfill what he perceived as the fan base’s expectations. The chase scenes and battle scenes are pretty cool…although there is a Batman fight scene that appears awkwardly fake and too disjointedly choreographed.  It just didn’t look real. The final battle is over 25 minutes long in a 2 ½ hour film.  Superman just doesn’t take off and land anymore.  He plummets to earth with an explosive bang and jets to the sky like a missile. Over dramatized for effect.  Dream sequences, flashbacks, nightmares.  They were all utilized.  There was clapping at the end.  Some will be happy and satisfied.  Most will be a little disappointed, I feel.  Is it worth the price of admission?  Probably.  Most critics are not impressed.  This one can be for the young people who aren’t so hard to please.
(Review by Cheryl Wurtz)