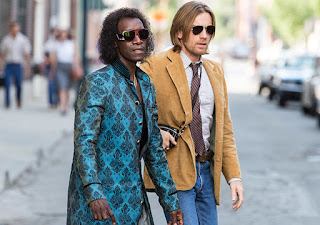 The music of the late great jazz giant trumpeter Miles Davis defies convention. It's free form improvisational style changed the course of modern jazz. Don Cheadle, who co-wrote with Steve Baigleman, co-produced, directed and stars attempts the wild retelling of a moment in the life of Miles Davis later in his career. The movie honors the music, giving little insight on his musical process and a lot of his self involved withdrawal from music world. This is not a straight telling of a story. It weaves in and out of his life and loves while mired in medical problems, drug use and creative block.

Miles calls his music social music because the word jazz boxes it in. In 1975 Miles went silent for 5 years. He's fighting the record label who wants the reel to reel tape he has been working on, but he wants his money first. Enter Dave Brill (Ewan McGregor) who knocks on his door claiming that he's from Rolling Stone and the record company set up the interview. Miles immediately punches him in the face. Apparently everyone knows about the elusive tape and Dave hopes to get a hold of it for his story which he played fast and hard with the truth of his affiliations. Even after meeting with the record company Dave manages to stick next to Miles who comes home to find a party at this house. Dave manages to steal Miles key and almost gets the tape, until one of shady A&R guy and his up and coming client (Lakeith Lee Stanfield) show up, and they end up stealing it. There's a lot of running around after the tape, guns drawn, coke snorted, punches thrown.

There are flashbacks of Fances (Emayatzy Corinealdi), a dancer, that becomes his muse and later his wife. But his erratic behavior, drug use, and insecurity lays to waste what was a beautiful relationship. There's no explanation of the whys and hows of his quirks that cause him to be so self destructive. His demanding and focused musical genius has him working with the talented and greats in his genre. The music weaves in and out of these quick cuts of the past and present offering a bit of insight. Cheadle does a good job embodying the swagger and raspy voice of Davis.

The crazy cartoon chase for the tapes keeps the movie going while the backstory flashes in and out in sort of a riff. The concept seems so disjointed at times. Fortunately the music keeps the movie from totally being frustrating. If nothing else, it makes one want to ITunes some Miles (if you don't already have it on your playlist) and listen once again to his pioneering genius.
(Review by reesa)

Email ThisBlogThis!Share to TwitterShare to FacebookShare to Pinterest
Labels: Miles Ahead review