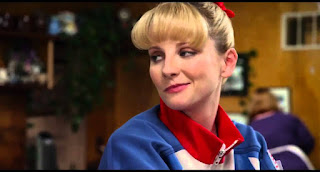 Opening:
I was in the Olympics once. I actually came in last place and my metal was an empty Coke with a piece of string, it was magical. That didn’t actually happen but I can assume if I came in last that would be my prize. Let’s get reel and break this down.


Plot:
A foul-mouthed former gymnastics bronze medalist must fight for her local celebrity status when a new young athlete's star rises in town.


Pros:
Towards the end of the movie, I felt more connected and sympathetic with main character and most the jokes hit.

Cons:
Here is where the main issues lie: First, some of the jokes fall flat and felt like desperation with the raunchy humor. Secondly, the main character is extremely unlikable for the first half of the movie. You know when you see a bratty child and think to yourself, “It’s okay; hopefully when they get older they won’t be that way.” Yeah, this movie isn’t like that. The main character is a grown woman and she is extremely bratty and unlikable. I get why she is that way but they should have toned it down. With that said, she did grow on me but not until later in the film. And lastly, most of the supporting characters are either unlikable or complete wusses and at some points it was like experiencing slow torture.


Pros:
Melissa Rauch is known for her role in the Big Bang Theory and this one really made us forget about her sweet and adorable role in that show and we were introduced to a foul-mouthed Rauch. So I appreciate her trying new things. The second half of the movie is where I really honed in on her character and got behind her actions and I saw glimpses of great acting. Despite on how some of characters are written, I enjoyed all of the actors including Sebastian Stan, which was nice to see him outside of the Marvel Cinematic universe.


Pros:
A well-shot independent film so no complaints here. There is one really effective dolly shot towards the end that really encapsulates Melissa Rauch’s character and the end of her arc and that was really nice to see.


Pros:
Once you get passed some of the unlikable characters, it’s a movie that’s filled with some soul and I found myself enjoying it. However…

Cons:
…it was rough at start and could turn some people off from either the characters or the humor itself.


Overall:
It was a humongous hurdle to get over with this movie, but once I did, I found a delightful story of someone who is having trouble moving on from the past. I do like Melissa Rauch and I hope she does more beyond the Big Bang Theory.