My Name is Doris 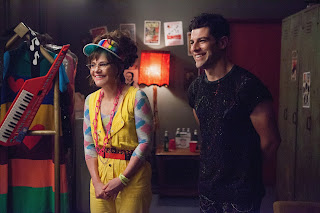 Movies has always had stories about older men and younger women and no one really says squat about it. But an older woman with a younger man, the response is “tsk tsk...she should no better”. It's hard not to change that attitude when it comes to Sally Field in the title role. She brings such an amazing fresh innocence and vitality to a woman way past her prime who has been invisible most of her life. Written by Michael Showalter and Laura Terruso and directed by Michael Showalter, it sometimes borders on slapstick, but it also hits some of the truths of love and expectations.

Doris has just buried her mother who she has taken care of over the years, putting her own life on hold. Her brother Todd (Stephen Root) and his wife Cynthia (Wendi McLendon-Covey) wants her to see a therapist Dr. Edwards (Elizabeth Reaser) to clean her hoarder stuffed home on Staten Island so they can sell the house and she can move closer to her job. Doris works at a ad agency since forever and basically had been grandfathered in as an accountant. The company has changed hands and it's all young and creative staff. Doris cute meets the new guy, John Fremont (Max Greenfield) in the crowded elevator and he compliments her glasses while sitting them right on her nose. It's a new experience for Doris, who is somewhat taken by the kindness. Thus starts Doris's fantasy world where she is imagining all the possible romantic scenarios with John.

Doris feels suddenly alive with that giddy feeling of first crushes. Her best friend Roz (Tyne Daly) tries to speak reason to Doris, but her daughter Vivian (Isabella Acres) shows her how to look up John on Facebook They create a fake persona to friend him. She discovers John's favorite band Baby Goya and she runs out to buy the CD. The band is playing locally so she decides to go hoping to run into John. Doris is very quirky. She rummages through curbsides for treasures to bring home or decorate her desk. Even her fashion style defies convention for a woman her age. For the hipsters she is deemed “fierce” gaining acceptance by John and his friends. Even the band singles her out and ask her to be on their next album cover. It's a new world for Doris. She considers John's friendship as possibly something more. Until she discovers he has a girlfriend, Brooklyn (Beth Behrs).

The journey Doris takes to experience the world and her place in it is filled with uncomfortable moments. Mostly because you may have been there and done it too. Sally Fields is brilliant as the romance novel heroine of her own making. She is vulnerable, awkward, and totally charming. She holds the screen and your heart. Chick flick, absolutely. The best thing to share with besties.
(Review by reesa)

Email ThisBlogThis!Share to TwitterShare to FacebookShare to Pinterest
Labels: My Name is Doris review