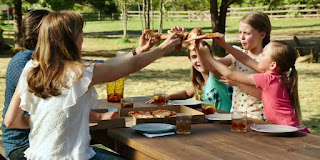 The memoir by Burleson's Christy Beam's story of her young daughter who had a near death experience and was cured from a digestive disorder has been made into a movie directed by Patricia Riggen and written by Randy Brown. As far as faith based movies go, this one is tempered by the fact it's a true story, the excellent performances, and production quality. It's a definitely a five hankie movie filled with hope and a two by four religious smack on the head.

Jennifer Garner plays the mom Christy Beam to three beautiful young girls and wife to her handsome husband Kevin (Martin Henderson) living a blessed life in the Texas countryside. She is stressed that they have sunk all their money and equity in her husband's new veterinarian clinic. Her perfect life is shattered when her middle daughter Annabelle (Kylie Rogers) had developed a pseudo-obstruction motility disorder. She can't eat, her tummy is swollen, and she is in constant pain. The worried parents take her to numerous doctors who say they can't find anything. Until after another rush to the ER, Christy puts her foot down and says she's not leaving until they tell her what is going on with her daughter. She is referred to a specialist at Boston Children's Hospital, Dr. Nurko (Eugenio Derbez), but the waiting list for patients is over nine months long. Christy's faith is sorely tested wanting to know why such a loving God would make her poor child suffer. It's doesn't help that some of members of the church suggest that maybe Anna is sick because of the sins of her and her husband. Even Pastor Scott (John Carroll Lynch) is unable to sway Christy not to lose hope.

Christy decides to take Anna to Boston and hopefully persuade the doctor. In a gut wrenching scene she pleads with the receptionist but there is nothing she can do. Later, feeling defeated, Christy and Anna meet a Angela (Queen Lafifah), a waitress, who offers them a tour around the city. Just when Christy is totally beaten down, she gets a call from the doctor. Then comes the tests, the treatments, and the possible fatal prognosis. Anna will have to come back every six weeks while on a trial medication. This puts a financial strain on the family. Not only that, even Anna is beginning to get depressed. Once home again, the sisters climb the old dead tree in the yard when Anna falls into a hole in the trunk crashing head first to the bottom. Hankies out again as everyone works to save her. Later, Anna recounts having a out of body experience where “someone” tells her it's going to be all right. Hence the miracle from Heaven.

Jennifer Garner really shines in this feel good movie. For anyone who has had a sick child, it strikes close to home. For those who go to church, it's inspirational. For jaded regular movie goers it's about par with a Lifetime Channel movie of the week. But you will leave with a smile.
(Review by reesa)

Posted by Dallas Movie Screenings at 10:29 AM

Email ThisBlogThis!Share to TwitterShare to FacebookShare to Pinterest
Labels: Miracles From Heaven review