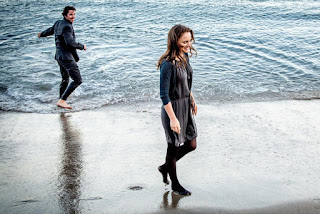 Director/writer Terrence Malick tries the patience of an average movie goer, but rewards the viewer with mesmerizing visual poetry. In this new feature about Rick, a writer stuck in a loop of self examination as we are taken on his internal journey looking for love with his various women and his complicated relationship with father and brother. The film centered in Los Angeles and Las Vegas is littered with famous faces popping up in a blink or you might miss moments. The film defies time and space as it meanders through Rick's psychic crisis “living the life of someone I don't know”.

Christian Bale is said to have been given only a character description with no lines as he reacts to his world of luxury, privilege, eroticism in these cold shallow glass and metal sky scrapers with beautiful people that don't seem to have anything important to say. One moment he is involved in threesomes with sexy women, the next he's walking through the streets of LA's homeless studying the denizens with his writer's eye. Rick's odyssey is broken up into chapters with titles from the Tarot deck as he explores the relationships of his women, his friends and family. The Moon: Della (Imogen Poots), The Hanged Man: His brother (Wes Bentley) and his father (Brian Dennehy), The Hermit: Tonio (Antonio Banderas), Judgement: his ex-wife Nancy (Cate Blanchett), The Tower: Helen (Freida Pinto), The High Priestess: Karen (Teresa Palmer), Death: Elizabeth (Natalie Portman) and Freedom: Isabel (Lisabel Lucus).

Rick is so disconnected to his life and emotions that one wants to yank him from his self indulgence and slap some sense into him. The back ground of Los Angeles and it's shiny modern extravagance, and Las Vegas with it's bigger than life opulence would be mind numbing for most people. For Rick, one wonders if he has any real conversations with the people around him. Rick barely speaks while the characters he encounters all flint here and there. It has been reported that Malik didn't give Bale any scripted words. There's no beginning or ending to the story. No car chases, no shootouts, no major anything. Just a slow beautiful, contemplative, complicated, disjointed, frustrating tale that is wonderful to look at, but there is really nothing there there.
(Review by reesa)

Email ThisBlogThis!Share to TwitterShare to FacebookShare to Pinterest
Labels: Knight of Cups review