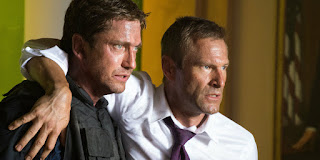 Opening:
Help…London Has Fallen…and it can’t get up. That joke was for my elderly fans. I got you guys. I never saw Olympus Has Fallen so let’s do this. Let’s get reel and break this down.


Plot:
In London for the Prime Minister's funeral, Mike Banning discovers a plot to assassinate all the attending world leaders.


Pros:
Is this one of the greatest action movies ever made? No, but I did enjoy it and I think the director knew what this is and just had fun with it. It’s a story where characters have to go from point A to point B and make it entertaining with over-the-top violence and cheesy one-liners and the director does just that.

Cons:
There is one complaint. There is a “mole” side story to the plot and it was completely pointless and didn’t add anything to the overall story and you could have cut that out. I honestly don’t know why it was there.


Pros:
Not seeing the first one I no idea if Butler could be in a good franchise since 300. I think he is perfect for this movie. He was charming, badass, and he fuels the movie. This is definitely a good franchise for him. Aaron Eckhart is always great in everything he is in and Morgan Freeman is good too, I just wanted more with him…because more Freeman is never a bad thing.


Pros:
The gritty, intense style of violence adds to the kinetic energy of the cinematography and makes it a more engaging adventure. There is also a cool one-take shot in the middle and I always appreciate those.

Cons:
Some sets were lit in a way to where it stood apart from the darker scenes and it looked too much like a set. But honestly, that’s not an issue just a nitpick because I am crabby guy.


Pros:
If you get to release your brain and enjoy a hardcore violent action movie without any thought, you will enjoy it. I hear the first one is good so if you liked the first one you will probably like this one.

Cons:
There are some explosion effects that stick out and do not blend in well with the environment. But if it’s a cheesy 90’s action movie, then I expect 90’s effects.


Overall:
I must have been in a good mood while watching it; I don’t know I can’t explain it. I enjoyed myself, I had fun, and I think you will too if you have a Die Hard scratch that you have to itch.