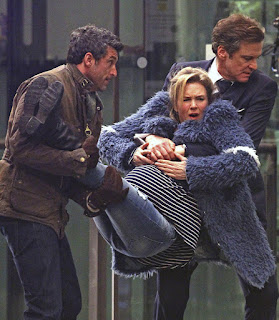 Bridget Jones is back in an amusing continuation of the romantic confusion of her life. The third film of the franchise was directed by Sharon Maguire and written by Helen Fielding, Dan Mazer and Emma Thompson. Renee Zellweger looking a bit different from the last movies and a little bit more worn out, doesn’t really make single working women very appealing as she still sees herself incomplete without a lovelife.

It’s Bridget’s 43rd birthday. She’s working as a producer for a news program where her friend, the on air talent Miranda (Sarah Solemani) urges her to get out and “shag” someone. Bridget has pretty much accepted being a spinster and embracing her singleness. So she is feeling a little more disconcerted when she attends a funeral for her old boss and lover Daniel who went missing on a plane. She runs into Darcy (Colin Firth) who is there with his wife. They have a an awkward and uncomfortable encounter. Bridget realizes that she cannot hang on to that failed relationship and goes with Miranda for a music festival weekend. While there she cute meets Jack (Patrick Dempsey) and gets it on while drunk and in the wrong tent. A few days later she runs into Darcy again at a christening and they are the godparents. He confesses he’s getting a divorce and still has a thing for her. So they get it on. A couple weeks later she realizes she’s pregnant and doesn’t know which one is the dad.

Somehow or other she has to tell each of her partners that they could possibly be the father of the child. But at first fails to tell them there may be someone else involved. When they find out about the other, there’s a bit of a competition for the parental rights. Both men are handsome and brilliant, and respect each other’s work but they are totally opposite in temperament. Jack is a computer dating mogul from America, and Darcy is a stalwart barrister. Bridget with the help of her eccentric friends, parents and amused gynecologist (Emma Thompson) all offer their support on discovering which man is the father.

While the sit-com type of story is somewhat formula, the cast rallies around the absurdity without getting too annoying. Getting Bridget to the hospital when she is in labor during a traffic jam is ridiculous, but laugh out loud funny. It's also a fantasy to have two successful handsome men at one's beck and call. And while we all pretty much know who she will eventually end up with, it’s just a nice time to get there.
(Review by reesa)