Is That a Gun in your Pocket? 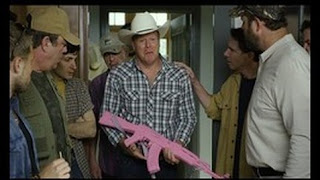 Didn’t Chi-Raq come out last year? This story has been told many, many times and this is another interpretation of it. You were expecting a great opening but this is all I got. Let’s get reel and break this down.

If there's one thing that the men of Rockford Texas love as much as their women, it's their guns. But when a gun incident at a neighborhood school spurs one stay at home mom, Jenna (Andrea Anders), to rethink Rockford's obsessive gun culture, life in this idyllic town is turned upside-down. Much to the chagrin of her husband, (Matt Passmore), Jenna ignites a movement by recruiting the women to withhold sex from the men until every gun in Rockford is vanquished. A wild and hilarious showdown ensues between the sexes. As tensions and libidos rise, the men and women of Rockford must decide what's really important: keeping the peace or getting a piece.

Play its Based off of

A Greek play named "Lysistrata" written by Aristophanes and first performed in 411 BC. In the play, Lysistrata persuades the women of Greece to withhold sexual privileges from their husbands until they negotiate a peaceful end to the Peloponnesian War.

Pros
At least it’s a coherent story? I will give the director props for taking an issue like gun control and shed it in this lighter side and have some dramatic pull. By doing this, you can really open people’s eyes to the issue that may have been shy to talk about it and sometimes they might be persuaded to take action to standup against it. However…

Cons
…the lighter comedy aspect isn’t really funny or entertaining. All the humor felt forced and they were really striving for the raunchy humor, ironically which is little to none present, especially it having the “R” rating and the content presented in the story. The dramatic scenes also didn’t pull me in as much as I wanted to. Maybe it’s because the humor turned me off so early in the film, but then again, I am an idiot.

Pros
Everyone is fine. It could be worse.

Pros
It is shot with a bright, sterile look so there aren’t really any risks with the cinematography. It’s safe.

Cons
The whole hour and half is rough. It feels like a two hour plus film and it drags because of the lack of humor or entertainment.

Overall
This is without a doubt the blandest film I have seen this year. Nothing terrible, nothing great, it is what it is. While writing this review, I actually have forgotten about most of the scenes in the movie.

Email ThisBlogThis!Share to TwitterShare to FacebookShare to Pinterest
Labels: Chase Lee, Is That a Gun in your Pocket? review