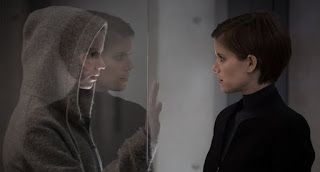 Species and Ex Machina have a Very Average Love Child

Director Luke Scott is the son of Ridley Scott and this is his directorial debut. I am not a fan of nepotism but if you can deliver I will shut up. Did Luke follow in his father’s footsteps and is destined to become a legend? Was this Alien or was this The Counselor? Let’s get reel and break this down.

A corporate risk-management consultant must decide whether or not to terminate an artificially created humanoid being.

Pros
Luke definitely delivers and takes advantage of the isolated locations and action sequences given the small budget that was given. It’s an average debut but I can see glimpses of greatness and I am actually okay with Luke continuing to explore as a director.

Cons
The main issue with the story is the lack of emotional connection or weight to any of the characters. A lot of deaths occur and they feel extremely vapid and when the movie ends you question if you actually cared. With that, no one is really developed and feel one-dimensional, including the main character of Morgan, whom is the humanoid being. On top of all that, some characters come into the story and are gone as fast as they came on screen or are completely wasted.

Pros
To be honest, everyone is ok at best and I didn’t see any glowing or horrid areas with the performances. Everyone is serviceable. Paul Giamanti delivers the best performance? But his character also falls under one of the complainants from the section above.

Pros
The isolated locations and atmosphere adds to the small amount of tension to the story and the cinematography contributes to that.

Pros
With a runtime of 99 minutes, it does have a steady pace and you won’t spend too much time in the theater and has the intrigue of a good television movie so it should be a brisk watch.

Cons
The slow build up to the so-so climax might be a chore for some people because it does take a while to get going.

Overall
This isn’t the worst thing I have seen but it’s a serviceable debut and Luke can definitely grow from here. If you want an average escape this weekend this is your bet, but if not, you can definitely wait until it comes out available to rent.