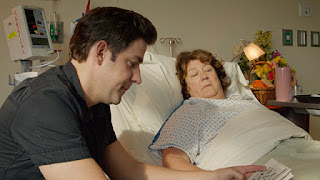 They popular theme of the dysfunctional family dynamic is a popular theme of many movies. It succeeds or fails depending on the cast and/or storyline which seems to be pretty much interchangeable for this genre.. This new film directed and produced by John Krasinski and written by James C. Strouse had it’s world premiere at Sundance. It’s a small film that is equally funny and annoying, saved only by the stellar performance of Margo Martindale.

Krasinski plays John, a graphic novelist living in NYC with his very pregnant girlfriend, Rebecca (Anna Kendrick). One day she goes to his office with his suitcase packed and a plane ticket because his father called to say his mother (Margo Martindale) is in the hospital. Returning to his home town is filled with a bit of nostalgia that is as usual not well met. His ex-long-time-girlfriend Gwen (Mary Elizabeth Winstead) is now married with child to another school mate Jason (Charlie Day) who just happens to be his mother’s nurse. Gwen is unsatisfied with her married life and throws herself on John, who confesses to Becca, who immediately goes to see John.

John is having some turpitude about making a more serious commitment to Becca even though they are soon to be parents. The heart to heart talks with his mother are the glue that keeps this film from being just another sit-com style of film. John’s brother, Ronnie (Sharlto Copley) has been fired by his dad (Richard Jenkins) from the family plumbing business. The business is teetering on bankruptcy and dad can’t get a loan or pay his employees. Ronnie is obsessed with his ex-wife by stalking her house so he can see his kids. His wife is now seeing a youth pastor Rev. Dan (Josh Grobin) who tries to mediate.

Krasinski’s sad sack face works well as the slightly confused and unconfident young man. Copley as the older brother is suffering from thinking he made the wrong choice of divorcing his wife. Crawling into the children's window at night is kinda creepy. Jenkins plays the crying mess of a husband. The parents are obviously devoted to each other, so it’s hard to understand why their kids are commitment phobic. Kendricks is kind of wasted as the understanding girlfriend having to be hugely pregnant on her tiny frame. Mom Sally’s advice to her son of “you won’t know until you get there, that’s it’s okay” is a bit of sage wisdom that seems to uplift what could have been a tear jerker ending. It’s a movie filled with light hearted and disconcerted moments, but in the long run, it’s okay.
(Review by reesa)

Email ThisBlogThis!Share to TwitterShare to FacebookShare to Pinterest
Labels: The Hollars review