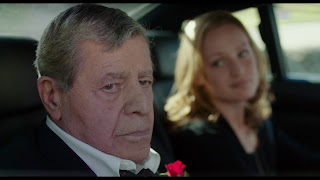 This slightly disappointing film tells the story of Max, an old man who has just lost his wife of considerable time. His family is a bit dysfunctional and he finds out some years before his wife dies that she had cheated on him with another man. Consequently, he digs deeper into this hidden affair. The film pans in and out of Max’s memories of life with his woman where the character suddenly appears eerily in the house. Jerry Lewis, who plays Max, along with Kevin Pollack, who plays Max’s son, are probably the only two actors who carried the show.

The story wasn’t very interesting and I feel that such a revelation of an affair that late in a marriage deserved some better plot points. A sense of adventure was lacked in this picture where there could have been a lot implemented. Kerry Bishé did not perform very well as I felt that one could tell she was acting. Some lines were a bit hard to hear from her and I felt like the independent film stereotype surfaced unfortunately in her scenes.

Some segments in the film did contain some good entertaining like the moments where Max is in his house alone late at night. I do not care for spooky films but these scenes provided that sense of the haunting of the affair. He tears into drawers and knocks over books in an intense search that instantly engages the viewer.

The idea of the sadness that comes to the elderly sometimes when they enter a nursing home was well communicated in a scene. Max has been torn from his house and is put in a facility that he feels not at all comfortable in. One felt his loneliness in his situation. A tense relationship that basically constitutes the dysfunction of the Rose family comes in a father-son type. Pollack and Lewis exchanged meaningful and clear lines that represented the flaws in their characters’ past.

Max and his granddaughter’s relationship was pleasant to see as one could understand the bond that they had. Although their scenes were restricted by some lackluster deliverance of lines, they were well scripted.

I’m always happy to see films come out that weren’t horrible and just made for money. Although the film was less than what I was expecting, it was a palatable story. It was a long process for this project to be released and the filmmakers should be happy that it’s out.
(Review by Wyatt Head)