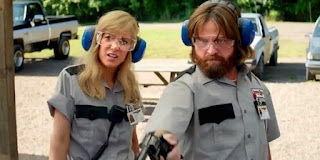 If I Had Surgery, I Might Have Busted Some Stitches

Opening
As someone who doesn’t like Napoleon Dynamite or Nacho Libre, I was going into this ready to hate it. I am now a fan of Director Jared Hess. Let’s get reel and break this down.

Plot
A night guard at an armored car company in the Southern U.S. organizes one of the biggest bank heists in American history.

Pros
Being based on an unbelievable true story, this movie is insane, dumb, and downright entertaining in the best way possible. Hess brings his staple of awkward and dry humor and it works so well with the characters and their lack of common sense and buffoonery. What Hess does very well with his style of humor is that he isn’t scared to do the lowest common denominator in terms of humor i.e. poop and sex jokes; but he does them so unexpectedly and straight-faced that you can’t help but laugh.

Cons
The first five to ten minutes were absolutely humorless and I was extremely worried about the rest of the movie. But there was some mystical mist that washed over me because after that bump in the road, I found myself enjoying it and laughing way more than I probably should have.

Pros
The whole cast is on point with the improv and straight-faced attitude giving each line of dialogue a breath of greatness. Listen, it isn’t easy delivering dry, very dry, bone dry, humor but everyone is on their A-Game. Out of the ensemble, Jason Sudeikis is my favorite. Let me know in the comments who is your favorite!

Pros
Most of the shot selections are softly lit and averagely composed but the “action” sequences are some of the best comedic moments as they are shot and edited very epically but what’s happening on screen is on a small scale.

Pros
If you love Napoleon Dynamite and/or Nacho Libre, then the entertaining level will be through the roof and you will be enjoying yourself. The energy of the comedy is palpable and makes this movie feel like half of its time length and that’s the best compliment I can give it.

Cons
Like I mentioned above, the first ten minutes were rough and it almost turned me off but then it reeled me in, hook, line and sinker.

Overall
Simply put, I was surprised on how much I enjoyed myself. Is it weird, awkward, juvenile, dumb but color me surprised its really funny.

B
(Review by Chase Lee)