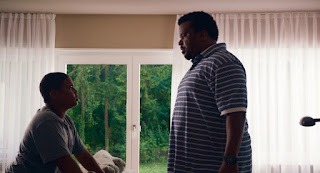 A24 is releasing this? Say no more, I am on it. I trust this production’s company releases. I set aside a whole night to view this film, cancelled my plans, and isolated myself in my room. I am done watching the movie…eh, it’s fine. Let’s get reel and break this down.

The romantic and coming-of-age misadventures of a 13-year-old American living in Germany.

Pros
The intimacy between Morris and his father, played by Craig Robinson, are handled very well. The relationship these two characters have felt real and genuine. Every conversation dealt with growing up and finding your place in the world and really hitting on a relatable level while still providing flair and a bit of uniqueness to the coming-of-age subgenre.

Cons
Every scene that didn’t deal with Morris and his father, I didn’t care for. All the supporting characters felt more like a wrench in the story overall. There were even some characters introduced and didn’t really contribute much and maybe providing ten minutes of screen time. The weight of the story emotionally also hit as hard as I thought it would but has a nice comfortable ending.

Pros
Markees Christmas (awesome name btw) plays Morris and he had the charisma and likeability to carry the film and he was simply a joy to watch. Craig Robinson was wonderful and I hope he does smaller dramedies like this. I know this is a smaller movie that won’t get any recognition but I enjoyed Robinson’s performance a lot and thought he sunk into his character.

Pros
The way its shot isn’t anything impressive but some unique angles and the colors provide a style that does make this one stick out. It provides the upbeat nature of the characters. Another film I can compare the look to would be Dope from last year.

Pros
This is one of the shorter A24 releases clocking in at 90 minutes exactly, but with 10 minute credits it seems even shorter. It’s a nice adventure of a 13-year-old going throughout life and would be best on a rainy day.

Overall
I wasn’t impressed with this but I do admire the relationship between Morris and his father, the performances between those two, and some of the scenes outside of that. But the power that coming-of-age films have is very average in this one.