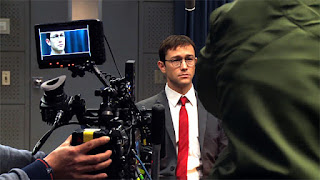 Should Edward Snowden be tried for treason, or is he a heroic whistleblower? According to director Oliver Stone, you will be urged to feel some sympathy towards his current situation. Stone who wrote the script with Kieran Fitzgerald based the story on the books The Snowden Files by Luke Harding and the Time of the Octopus by Anatoly Kucherena. The movie covers the career of the American computer wunderkind who leaked classified information from the National Security Agency to The Guardian in 2013. The real Snowden who now is living in asylum in Russia shows up at the end of film via an online broadcast.

Snowden (Joseph Gordon-Levitt) had enlisted in the U.S. Army Reserve as a Special Forces candidate, but he broke both his legs during the training. He began working for the CIA despite the fact he didn’t have a high school diploma and only a GED. He was basically self taught and proved his worth during his classes. Earning the respect of this teacher Corbin O’Brain (Rhys Ifans) who takes him under his wing. Nicolas Gage shows up as another teacher Hank Forrester. Snowden also meets his love interest Lindsay Mills (Shailene Woodley) though an online dating site. Despite their liberal vs. conservative beliefs, they are both smitten with each other. She is an amateur photographer and he can’t tell her what he is doing.

It’s no doubt that Snowden was a brilliant computer geek. He’s given some very important jobs with very secretive projects. But then some of the work begins to nudge his strong sense of patriotic right and wrongs. The computer jargon is pretty heavy, so unless one is a nerd to it will fly over one’s head. As he moves from one agency to another, his relationship with his girlfriend is sorely tested. His story is told in a series of flashbacks as he is holed up in a Hong Kong hotel while he records his interview with a reporter (Zachary Quinto), photographer (Melissa Leo) and Guardian journalist (Tom Wilkinson). He knows that the government will soon discover that he took the information regarding the surveillance of everyone via phones, webcams, internet and everything. Terrorism is the excuse but it’s all about economic control.

Whether you believe that Snowden should be charged with espionage, or pardoned as a whistle blower is the debate for the future. But there is no denying that the capacity to keep the big brother watching can be easily manipulated to something darker and more sinister depending on who is in governing the country. And that is something we should all be seriously cognizant.
(Review by reesa)