Kampai! For the Love of Sake 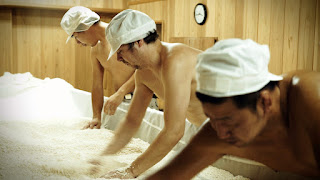 Many movies have been made about the distillation of spirits to create wine, whiskey, and beer, but this new documentary by Mirai Konishi takes us into the world of Sake, the Japanese culture and cuisine. The fermented rice wine can be served warm or cold is the preferred drink of choice with sushi. As the new brewers evolve from the ancient traditions, Sake is now adapting into the global marketplace.

The arduous process to extract sake from rice is created by sprinkling koji yeast to begin the fermentation process which begins by hand washing the rice and working for long hours. Breweries have been usually been kept in families for many generations, with the owners basically working as salesman, and the brewer master controlling the rice cleaning, yeast and distilling processes. There are scenes of shirtless men moving the rice around by hand. There are also many scenes of sake tastings at colleges studying the aggro-business, and sake conventions where you can sample various products.

The film also tells the story of sake from the perspective of a fifth generations brewer Kosuke Kuji who defied tradition by being an owner who also brews. He also has a You Tube channel about educating people on sake. An he’s taken his product outside of Japan trying to develop new markets. There’s also a story about Philip Harper from Cornwall, England who came to Japan to teach English and ended up serving a grueling 10 year apprenticeship at the sake brewery, rising to become the first non-Japanese master brewer. Another principal subject is John Gauntner the self described “sake evangelist” who has authored Sake Confidential and has become the world’s leading non-Japanese sake expert.

While some of the stories are interesting, one really doesn’t know all that much about how sake is made. There are about a thousand brewers in Japan almost like micro-brewers of beer in the U.S. Individual processes are probably highly guarded secrets passed down over the years, but these brewers endeavor to develop new products for consumption. With more international attention on sake, there’s even a brewer in North Carolina that is breaking into the sake market.

The word Kampai comes from a Japanese toast. While watching this film you may wish you had some sake to go with it. It may make the movie, which sometimes feels like a promotional film, more interesting to sit through. Kampai! For the Love of Sake opens at the Texas Theater, October 1, 2016.
(Review by reesa)

Email ThisBlogThis!Share to TwitterShare to FacebookShare to Pinterest
Labels: Kampai! For the Love of Sake review