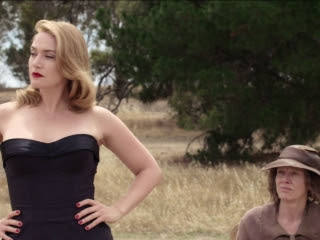 A black comedy revenge drama does not really describe this new film directed by Jocelyn Moorhouse who also wrote the script with P.J. Hogan. It’s based on the novel of the same name by Rosalie Ham who had wrote a treatment of her own novel back in 2000. The movie had its world premiere at the 2015 Toronto International Film Festival and opened in Australia and New Zealand in October 2015 becoming the second highest grossing Australian film of that year. It’s also had thirteen nominations at the 5th AACTA Awards. If that is not impressive enough, then just consider it stars Kate Winslet. That’s pretty much all you need to know.

Set in an Australian outback town named Dungatar in 1951, Myrtle (Kate Winslet) returns to town after 25 years away working as a dressmaker for designers all over the world. Impeccably attired with bright red lipstick she looks totally out of place in this small town caught in a time warp. She is greeted by police sergeant Farrat (Hugo Weaving) who is enamoured by her dress that he identifies as Dior. Tilly, as she prefers to be known, has come back to care for her mother(Judy Davis) nicknamed “Mad Molly” by the rest of the town. Her mother lives up to the town’s name, living in squalor and not recognizing her daughter. Tilly wants to discover what happened during the events of 1926 that led her to be sent away and separated with her mother.

The town folk discover Tilly is back when she appears at the local football game dressed in a bright red dress, causing the town team to become distracted. The handsome Teddy (Liam Hemsworth) asks her to change her gown. She does, only this time it’s strapless black gown with a high leg slit. She turns her alluring wattage on the other team, causing them to lose. Gertrude (Sarah Snook), the daughter of the town’s store has her eyes on William Beaumont (James Mackay) who has returned after living in West Australia. His mother wants to marry him off to some well to do young woman, not to the dowdy Gert. She takes up Tilly's offer to make her the bell of the Footballer’s Ball winning Williams attention in exchange for information on that happened to Stewart Pettyman. The son of town councillor Evan Pettyman (Shane Bourne) who died with everyone believing Tilly did it. Although everyone fears Tilly, they come to her to replicate the success she had with Gert who is now engaged to William. Pettyman brings in another dressmaker Una Pleasance (Sacha Horler) to compete with Tilly’s business.

Flashback haunt Tilly with the memories of the bully Stewart. Her mother still acting crazy slowly thaws to her daughter who believes her life is cursed. A short romance with Teddy almost lifts Tilly out of her fear to love, but tragedy forces karma to have its ultimate revenge. There are so many unusual characters with their secrets and unsavory natures that are slowly revealed. A lot of events occur, that you think it couldn’t get any more complicated. But by the end you will forgive the films inconsistencies and its two hour running time, and say “right on”.
(Review by reesa)

Email ThisBlogThis!Share to TwitterShare to FacebookShare to Pinterest
Labels: The Dressmaker review