Anna and the Apocalypse

Just imagine the TV show Glee with high school kids singing and dancing in the hallways then add hoards of zombies. This is pretty much what this new film directed by John McPhail and written by Alan McDonald and Ryan McHenry, based on the 2010 BAFTA-winning short Zombie Musical, is all about. Set in a small Scottish town called Little Haven during Christmas, it follows the plucky Ella Hunt as Anna as she becomes the warrior zombie killer while the world seems to be coming to an end all around her.

Like all teens who are unsure of themselves and facing an unknown future, Anna has decided to forgo University to travel to Australia. She breaks it to her widowed dad who is not supportive of the idea. The news on the car radio talks about a pandemic lethal virus threat, but since they are arguing on the way to school, they shut it off. In fact like all self involved teens they are only worried about their classes and personal relationships. Their angst is covered in the first song called No Such Thing as a Hollywood Ending. Anna is not attending the annual school Christmas show to work at the bowling alley with her best friend John (Malcolm Cumming). John wants to be more than just buddies with Anna, but she avoids it by reasserting they are the best of friends.

The next morning, Anna wakes refreshed and full of life as she head out of her house with headphones and hoodie while singing and dancing about the beautiful day. Completely oblivious to the mayhem and carnage happening all around here. Sort of like Shaun of the Dead here. She meets up with John in the park when a snowman lumbers toward them. Unsure and scared, Anna decapitates the snowman with a teeter-totter. Because everyone knows thanks to zombies movies, the only way to stop them is to get them in the head. Their phones are not getting wifi so they head to the bowling alley where Steph North, a lesbian outcast (Sarah Swire) and Chris Wise (Christopher Leveaux), the boyfriend of Anna's best friend Lisa) are hiding. They discover people are posting selfies with zombies on social media. Because unfortunately that's exactly what young people would do. They learn that some survivors are holding up at the school after the Christmas show. They have heard the army will be coming to help rescue them. The tyrannical headmaster Arthur Kaye (Paul Kaye) doesn't want to lose control of his captive audience and lets the zombies in.

The fight to head to the school is helped by Anna's arrogant ex BF Nick (Ben Wiggins) and his gang. Anna wants to find her dad Tony (Mark Benton) the school janitor, Chris wants to find Lisa (Marli Siu) and his grandma, and Steph wants to get her car keys taken by the headmaster. The final journey of course leaves several characters behind and Anna finds a strength and confidence in herself with the aid of a bloody candy cane decoration. This is definitely destined to become a cult classic.
(Review by reesa)


Dallas Movie Screenings had a chance to meet with Ella Hunt at the Alamo Drafthouse Cedars. She spoke to us of her start in community theater where she had the good fortune to be seen by an agent who told her mother that she should go into acting. Being athletic and having singing skills helped secure her in her role as Anna. She loved filming in Scotland having been from a small town when she was younger. Hopefully we will see more of Ms Hunt. 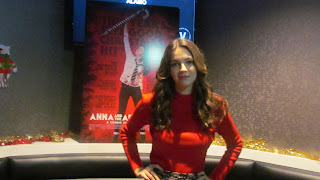 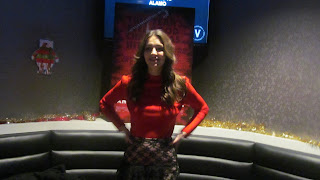 Email ThisBlogThis!Share to TwitterShare to FacebookShare to Pinterest
Labels: Anna and the Apocalypse review, Ella Hunt