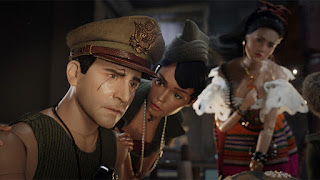 Based on the documentary film featuring the artist and photographer Mark Hogancamp, Director Robert Zemeckis, known for introducing the motion-capture technique, made it all possible of crafting a film with a massive special effects, motion capture, and CGI just like how he did for his movies Back to The Future, Forrest Gump, Who Framed Roger Rabbit? and The Polar Express. I’m not a war-movie person, I just want to see how the film goes well with Zemeckis doing the steady storytelling with motion-capture from the actors.

In this film, Mark Hogancamp (Steve Carell, The Office) becomes a victim of sexual assault, which leads him having no memories to remember his adult life. When he constructs a miniature replica version of World War II for his photo shooting and his art show, he must capture every image to make a good work of art and recover his memories.

Here, I get to see Steve Carell as the main center of the film along with the supporting actresses Diane Kruger (as a town’s witch of Marwen), Leslie Mann, Merritt Wever, Janelle Monáe, Eiza González, Gwendoline Christie, and Leslie Zemeckis. Steve Carell really out done it when it comes with comedy, recalling The Office, as well as making romantic sceneries which fits the story dynamics. Carell’s character really smooths the balancing onscreen appearances between his character and his toy-performing counterpart. The supporting cast done a good job as well as the composer and Zemeckis’s frequent collaborator Alan Sivestri who provides a similar textures from Back to The Future and Forrest Gump.

However, there are three things I didn’t enjoy in this film. First, the overuse of CGI and special effects as an advantage for an action-adventure film. Second, Leslie Mann’s performance seems to be overwhelming for a romantic-turned friend for Carell’s character which nearly takes away the duo’s character developments for the story’s dynamics. I guess happiness can’t be solved until the very end. And lastly, Diane Kruger’s performance makes it all too scary for a female role in this film and lack of positive inputs like happiness, sorrow, love and glory.

Compare to the 2008’s Get Smart, also starring with Carell, the action-packed elements are just written in as a reference point to all the shenanigans that occur like the Nazis and Dwayne Johnson’s Agent 23 character. It is a bit lengthy, clocking to 116 minutes, but once you watching this, it just goes with the flow. Get Smart was not a great movie by any account. I have thoughts about giving that film a C or D-grade.

What is great is I had met Steve Carell after the Q&A of this film in Dallas, TX. He is such a cool and funny guy any film or director could ever have when it comes to comedy and character personality.

Overall, Welcome to Marwen is okay, though it’s a little bit off on the storytelling and the usages of special effects that strongly holds the position for a film tool instead of focusing on the Carell’s and Mann’s character. I mean the director does a good job of keeping the pace and momentum of structuring the storylines, but needs improvement on several other character’s developments for better depth, better focus, and suitable amusement. Though, it did provide the viewers an ordinary escape from a satisfied grin on the face.

By recalling Deadpool’s words “Life is an endless series of trainwrecks with only brief commercial-like breaks of happiness.” Running time: 116 minutes