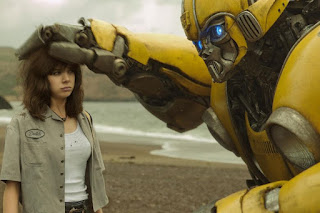 All of America should rejoice. Why? You ask. Because of a “Transformers”-related movie that does not suck or stink to high heaven.

I give part of that credit to Michael Bay, or the lack thereof. His name is not at the top for once, since with “Bumblebee,” he is involved with just a producer credit.

The director, Travis Knight actually brings some credibility to the proceedings since he has already made a real Oscar-nominated movie that did not leave a stench in the mire, with the release of 2016’s Oscar-nominated “Kubo and the Two Strings,” a tale that was actually nominated in the Best Animated Feature category of things.

The main star in this one, save for “Bumblebee” is Hailee Steinfeld, the Oscar nominated star of the Coen brothers’ “True Grit” in 2010. Even as a twelve-year-old girl in that tale, one can see that she was beyond her years as a top-notch performer.

Despite her age, (22 as of this writing) Steinfeld is still able to pull off the whole despondent teenager thing. In “Bumblebee,” Steinfeld’s part is Charlie Watson, that of a corny dog vendor on the local beach in California. Fate steps in when she finds a rundown car in the junkyard she usually digs through everyday after her job at the restaurant.

Her Charlie Watson persona deals with the daily grind of going to school, living for the weekend and just taking it as the cliché goes “one day at a time”.

Part of the proceedings also involve Jon Cena’s army colonel, Agent Burns, who even notes that the robots are a bunch of connivers, since they are called Decepticons. Cena, like Hulk Hogan, as well as Dwayne Johnson aka The Rock, has made a nifty post wrestling transition to the movie world, leaving behind any of the caricature parts of the wrestling industry.

“Bumblebee”, also takes advantage of the pre-cell phone days of middle 80s America. The movie also contains nods to “The Breakfast Club” (Bumblebee watches it on an old VHS videotape player). He also spits out a couple of tapes with ridiculous pop rock ballads.

Also involved in the story are Pamela Adlon as Charlie’s mother who borrows her car to take the family’s dog to the vet.

Also returning to do voice work is Peter Cullen, who has voiced Autobot leader Optimus Prime in all of the other “Transformers” movie entries, starting with 2007’s “The Transformers” leading all the way through 2014’s “Age of Extinction” as well as 2017’s “The Last Knight.”

The main bonus with “Bumblebee” is that there is not an abundance of locations being blown up. As a director, Knight knows how to spin a tale where everything does not adhere to “Snap, Crackle and Pop.”

What I can say and will say is that this entry is by far the best entry in the entire series. I liked it as well as respected it, but I’m sorry, I can’t give it any higher than a B- on my A-F scale.