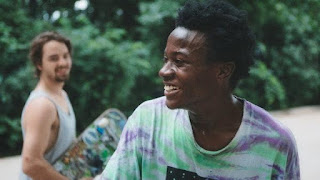 Minding the Gap, a documentary from first-time director Bing Liu, is, on its surface, a film about skateboarding. It begins by following a group of young men as they go around the city of Rockford, Illinois on their boards. The scenes, fantastically photographed by Liu, using his camera to gracefully follow the boarders down the street, set a mellow tone that’s soon ripped apart. As the film progresses, this surface level story fades into the background, unveiling a more upsetting, intimate, and introspective work.

Chosen as the documentary’s subjects are Kiere Johnson, Zack Mulligan, and the film’s creator Bing Liu. Johnson is in his late teens while Mulligan and Liu are in their twenties. These guys are clearly serious skateboarders. Liu’s camera shows off their moves and skills (Liu is mostly unseen since he works the camera) as they skate in designated skate parks as well as sidewalks, parking lots, and mostly empty city streets. The boarders use whatever they can find access to as their equipment; Liu uses close-ups of these makeshift skateboarding ramps and pipes to showcase the city instead of the typical cityscape shots. Just what is it that propels them to devote so much of their time to this pursuit? Through the subject’s interviews it becomes obvious that Minding the Gap is going to be a heavier work than the first scenes imply as the darker, heavier issues lurking around them begin to arise, suggesting more to their drive to skateboard than meets the eye.

Mulligan is a father-to-be with his girlfriend Nina. The two seem happy about it, but one has to wonder where the money to raise the kid is going to come from. There are frequent time jumps throughout the documentary, a device Liu uses to his advantage here to skip over Nina’s pregnancy, moving the story forward to right after the baby, Elliott, has been born. As Mulligan puts it, “having a child causes you to grow up fast.” The couple soon find themselves fighting and bickering about work, money, and taking care of the child. Mulligan also reveals his troubled relationship with his father. The footage about his relationship with his girlfriend starts to suggest that he will follow in his father’s footsteps. Meanwhile, it is revealed that Johnson is also from a troubled background. His parents separated when he was young and he was sent to live with his abusive father, who has recently died at the start of the shooting of this documentary. Johnson has since moved in with his mother and older brother. Early on, he comments to Liu that he’s never felt close with his family. Filmmaker Liu is also revealed to be from a troubled home. When he was younger, his mother remarried to a violent, abusive man, who hurt both Liu and his mother. Early interviews with his half-brother and a skate shop owner start to give the audience a clue about his past.

Some of these events are obscured by the presentation. Early on it feels like the people being interviewed are purposefully being vague. We get the idea that there is an issue, but it doesn’t always become clear until much later what that issue is. Liu’s abuse by his step-father is the most ambiguous. It’s not until he interviews his mother later in the documentary that his troubled past becomes obvious. Johnson’s interviews can feel equally vague at times. The intention is probably to get the audience invested in the subjects before putting all the information out there for them to process. Mulligan’s story is clearer as his relationship with his girlfriend tumbles before the camera. She tells Liu in one of her interviews that Mulligan hits her. An explanation she reluctantly gives to explain her screaming death threats to Mulligan, which Liu is shown hearing in a recording shared by Mulligan’s roommate during an earlier scene. Liu refuses to accept things at face value, one of the documentary’s strengths. He always makes sure to show things from all sides to give an unbiased view of the events, even going so far as to have someone film his face as he interviews his own mother – an interview he knew would be painful for both.

I often found myself wondering how truthful the events and emotions were in this documentary (I should mention that I’m not typically fond of documentaries). I’d imagine the subject’s behavior was affected by the presence of a camera crew. Were some things contrived or re-enacted for a more emotional story? How were these people acting when the cameras weren’t rolling? The footage of the guys skateboarding in the city streets also bothered me. Were these streets closed off while they did this? Was someone watching to make sure no cars were coming? This all seems irresponsible and kept taking me out of the moment while watching.

Ultimately, Liu’s film reveals how he and his subjects use skateboarding as a release to escape from the harshness of reality (an idea I imagine most people can relate to). The documentary feels like a therapeutic exercise for the subjects. The three men, and Nina, are shown as they grow, or don’t, over the course of time presented to the viewers and as they finally begin to come to terms with the rougher, less ideal elements of their lives and personalities.
(Review by Bret Oswald)