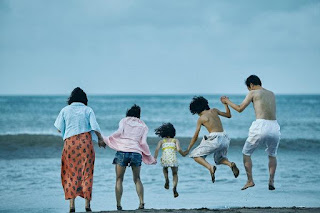 It has been said that the key to good filmmaking is tone management. If such a thing is true, then writer/director/editor Hirokazu Kore-eda has exhibited great filmmaking with Shoplifters, a family drama that exceptionally balances observational realism, interpersonal tension, and gutting truths about the secrets we keep close to the chest. If you’re looking closely, then, you might realize that that means the film contains essentially everything that a great film needs to be great. This one has those things in spades, and it also provides an immaculate ensemble of characters equally as capable of compassion as of pain.

The Shibatas are a family at the tipping point of complete poverty, living in Tokyo and barely getting by. The father, Osamu (Lily Franky), has had to miss work on a construction site after breaking his ankle. His wife, Nobuyo (Sakura Ando), works at a launderette, where she nabs things she finds in the pockets of the garments sent for cleaning. Her sister, Aki (Mayu Matsuoka), works as a stripper in a peep show, performing for men as lonely as she. The family also has a young son, Shota (Kairi Jō), and a matriarch in Osamu’s mother, Hatsue (the late Kirin Kiki, in a towering final performance), who regularly visits Aki’s parents to ask for money.

Immediately, it is clear that Kore-eda has developed a keen sense of place in this film. Life on the margins of economic ruin has clearly taken its toll on this family, considering the dire straits they are in following Osamu’s accident. Fundamentally important is any lack of judgment on Kore-eda’s part. He has not devised this story, a refreshingly humanistic and occasionally hopeful one, in order to look down upon this family as they combat their circumstances in a way that might suggest the filmmaker feels similarly about the families of real life. Nor, however, does he shy away from the morally questionable extremes of their attempts to escape poverty.

This is particularly important, given the implications of the film’s title: Osamu and Shota spend their days shoplifting necessities from the local market and various convenience stores, developing a system of discretion and secretiveness that – we discover quickly – works like a charm. Shota, armed with a backpack, is the one who makes it out with the goods. Osamu, shielded by the appearance of genuinely shopping, puts items in a basket that he leaves in the store, under the guise of a patron who has decided to leave those items. The gambit nearly always works here, though two major events change the dynamic and stakes of this set-up considerably.

The first, less obvious one is that, at the end of a shopping spree, the father and son happen upon a young girl named Yuri (Miyu Sasaki), cold and alone on the back porch of a shabby house, covered in scratches and bruising. They decide, after deliberation that sees the man in favor of taking care of her and the boy nervous about the authorities or the parents discovering their actions, to take her in. Here as well, Kore-eda trusts the audience to make up their minds about the morality of the choice. Meanwhile, the disappearance of the girl from the porch causes a stir in their small town: Her parents, known for their abuse of each other and neglect of the girl, are investigated for the girl’s possible murder.

The second, more devastating one is Hatsue’s exit from the story and, perhaps to an even greater degree, how Kore-eda investigates this family’s response to the event. The details won’t be gotten into here, but let us only say that it eventually leads to a series of revelations – not only about the place of Yuri and another child in this family, but about how this family came to be in the first place – that are each staggering in their cavernous depths of implications and cruel, harsh truths. The final word of spoken dialogue is particularly devastating, and then the silent denouement is truly beautiful. Shoplifters is an absolute marvel of tone management, of humanistic storytelling, of empathetic filmmaking, of thematic observance, and of immaculate performances.
(Review by Joel Copling)

Posted by Dallas Movie Screenings at 10:27 AM