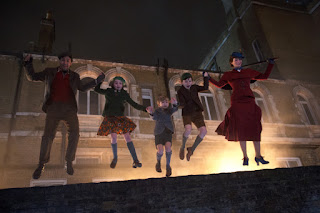 Review: Mary Poppins Returns
It’s finally here, after 54 years since the perennial Mary Poppins came out in 1964 which won five Oscars out of 13 nominations. Forget about Jurassic Park, Star Wars, The Lord of the Rings, The Avengers, and any existing live-action franchises. The world has Mary Poppins again. Rob Marshall, who helm the famous film Chicago in 2002, takes the leading role as the director of this beloved musical that takes the grown-ups and children to the magical world of Cherry Tree Lane in London. Featuring the stars of Emily Blunt in her titular role, composer Lin-Manuel Miranda, Ben Whishaw, Emily Mortimer, Julie Walters, Colin Firth, Meryl Streep, and the legendary Dick Van Dyke.

In this sequel, Mary Poppins (Emily Blunt) returns to Cherry Tree Lane to help the Banks family after a family tragedy that has brought themselves into a financial situation. With the help of Mary Poppins, the Banks children and the rest of the family all set out for the magical adventure around London and their imaginations, as well as finding what hope can be served as importance of the family.

Written by P.L. Travers to whom Walt Disney tried to obtain the rights from desperately, the story fits well like the original film, even when animated sequence is included. Back in the history between the conversion with Travers and Disney and the production of the original Mary Poppins, Travers disliked the idea of including the animated sequence since she wanted to the film to be completely live-action and no animation can be used. Her plan somewhat backfired when the animation was meant to be used for that sequence, enraging Walt Disney for doing that. Despite the dilemma, the film really become a crown jewel.

Director Rob Marshall brings the gorgeous, colorful production design on the sets, well-done animation sequences, a whimsical sense of humor, as well as provide colorful costumes that match its length from the original film. This result in an enjoyment bucket of recycled romp that even children love to see it coming. The musical numbers and composition provided by composer Marc Shaiman are outstanding that serves as equivalent to the Sherman brothers’ music pieces.

Mary Poppins, who served as a nanny for Jane and Michael Banks, now serves as a nanny for the children of now-grown Michael Banks (Ben Whishaw). Actress Emily Blunt gets a cheery-pitched role as the nanny who makes a perfect match for Julie Andrews who starred in this titular role form the original film, reviving the generation for both Jane and Michael Banks. Just like the original film, Mary Poppins returns to deliver a heaping dose of joy and childlike wonder. It’s still a spoonful of sugar and it’s still going to be sweet. Though, the one thing Mary Poppins can make everything possible. The answer is, of course, magic!

Supporting actor Lin-Manuel Miranda who played as Jack, the lamplighter and a former apprentice of Dick Van Dyke’s character years earlier, have done a great job providing a nice, jolly role that serves a familiarity of Dick Van Dyke’s Bert character in the original film.

What is funnier is Meryl Streep’s character as Topsy who produces a funniest, yet entertaining musical number for the Banks’ children for their amusement. Not to mention the cast of Banks’ children (Pixie Davies, Nathanael Saleh, and Joel Dawson) for making a great fitting role for the story’s dynamics and the musical numbers.

Also returning is the legendary Dick Van Dyke who played as the bank chairman Mr. Dawes Jr. (the son of Mr. Dawes Sr. who Van Dyke also portrayed). It is amazing how Van Dyke show up by surprise that led the audience to scream and shout joyfully for his return. What can be a great wake-up call is the two cameos coming from the actress Angela Lansbury (Disney’s animated Beauty and the Beast) and Karen Dotrice who portrayed as Jane Banks in the original film.

Thanks to the two animation divisions: Pixar and Walt Disney Animation Studios, the animation sequences and the backgrounds are perfectly captured every moment for the Blunt’s character and the three child cast for Banks’ children. However, the usages of special effects seems it bit too much, therefore over-boarding the animation sequence. It seems like the magic has worn off when it comes to special effects and CGI usages.

In regards, Mary Poppins Returns is the greatest film that reaches the title of being one of the top ten films of 2018. I can say this, it could be Oscar-worthy despite the critics’ reviews and massive usage of special effects as it may have a slight chance to being nominated. Come and see it if you ever grew up with Mary Poppins, let your childhood revive to its former glory, and remember the days you hit hard on watching these wonderful musicals. I will guarantee Mary Poppins Returns never seem to disappoint you. You will love it, trust me. It’s supercalifragilisticexpialidocious! Running time: 130 minutes