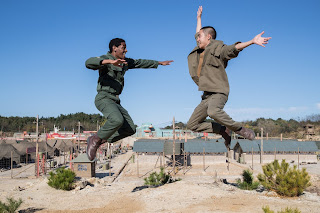 At the Geoje prison camp during the Korean War in 1951, the new American Commander wants to bring more western culture to the Communist North Korean prisoners. He brings movies and holds dances with a live band. Women from the nearby village come in to dance with the men and practice their English. To create a press event he assigns Sgt. Jackson who once had aspirations for Broadway to create a troupe of dancers. This South Korean musical drama film directed by Kang Hyeong-cheol was based on the Korean musical Rho Ki-soo. The film is subtitled in both English and Korean. There is some razzle-dazzle dancing, political intrigue, bigotry, and a racially diverse group who bond over tap dancing. And a fantastic soundtrack of eclectic tunes that will get the feet moving.

Ro Ki-soo played by K-pop idol Do Kyung-soo (a.k.a. “D.O.”) is a North Korean POW who arrives at the camp being given props and respect as his brother Ki-jin is a war hero. He stumbles into the dance hall after raiding the supplies of beer and dances free form before he gets beat up.
The lights go out and the place catches fire. Ki-soo is assigned to fix the damage. He watches as Sgt. Jackson (Jared Grimes) holds rehearsals to form a dance group to perform at the Christmas party for the international press guests. There is Kang Byung-sam (Oh Jung-se) who shows off a traditional wind dance and is trying to find his wife who he hopes to find if the troupe takes their act to the road. Xiao Fang (Kim Min-Ho), a portly Chinese soldier who is a gifted dancer but has angina when he dances for too long. Yang Pan-rae (Park Hye-su) who was one of the village women paid to dance with the men offers her translating service to Jackson and ends up dancing too.

Ki-soo challenges Jackson to a dance off on the condition that if he loses Ki-soo will join the troupe. Soon Ki-soo is obsessed with tap. He hears beats all around the camp and his feet can't stop moving. Before the war Ki-soo was supposed to join a Russian dance company and he learned a few things. The artist inside is released learning to tap. The dance parts of this movie are pretty awe-inspiring. Do Kyung-soo takes his K-pop idol skills from his group EXO to great advantage. If the rest of the movie was all great dancing it would still be good. But the drama kicks in when a communist instigator comes in and stirs the prisoners up for being so complacent with their western keepers. Ki-soo is conflicted by his need to dance and his need to stay true to his communist programming.

The broad comedy moments keep things light and entertaining. Then the second half of the movie gets bogged down by the American guards bullying their North Korean charges, the South Koreans willing to stone a young woman accused of being a North Korean sympathizer, the American Commander(Ross Kettle) treating his POW aide with stereotypical blinders. The dance is what keeps this movie going. The relationship of the dancers as they begin to consider themselves a family is the heart of the story. It's unfortunate, yet probably inevitable that the emotional ending was the only way to finish.
(Review by reesa)