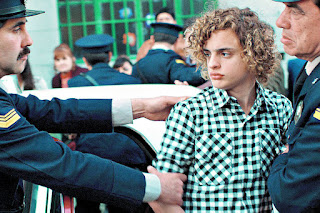 Director Luis Ortega’s film El Angel tells the story of Carlos Puch. Puch, named “The Angel of Death” by the media due to his pretty-boy looks, is one of Argentina’s most infamous criminals, currently serving a life sentence. Ortega co-writes, with Sergio Olguín and Rodolfo Palacios, a fictionalized account of Pugh’s criminal activity leading up to his arrest and imprisonment.

The opening scene finds Carlos (Lorenzo Ferro) breaking into a house in 1970’s Buenos Aires. He calmly roams the rooms searching for things to steal before turning on a radio and dancing around the living room. Ortega gives the audience a glimpse inside Carlos’s psyche with this episode, revealing Carlos to be carefree, indifferent, and off-kilter. As he leaves, he steals a motorcycle and rides home. When questioned by his mother about the bike, he nonchalantly waves the question off. His parents (Cecilia Roth and Luis Gnecco) are not amused by him continually borrowing things from friends and tell him to stop. Neither parent realizes where nor how he is actually getting these items. The Pughs are straight-laced and hard-working. Throughout the movie, Mr. Pugh is shown to be a stern man quickly becoming discontent with his son’s behavior while Mrs. Pugh is shown to become increasingly more upset by it.

After starting a new school, Carlos meets Ramón Peralta (Chino Darín), in one of his classes; the two become friends after a brief confrontation. A confrontation that is possibly flirtatious on Carlos’s part. Carlos gives Ramón a lighter he’s stolen and brags of his thievery. The boasting ends up being a good twist of fate for Carlos because Ramón and his father, José (Daniel Fanego), are also crooks with Ramón’s mother, Ana (Mercedes Morán), in on their jobs. The Peraltas are easy going and free-spirited (José is introduced in a revealing close-up while cleaning a gun on the couch in his underwear) and more in line with Carlos’s view on life. The family takes Carlos under their wings after he proves his skills to them by robbing a gun shop, a sequence that further clarifies his reckless behavior. Instead of casing the joint as he was supposed to, Carlos takes almost every single gun in the store then returns for the bullets. Together, Carlos and Ramón embark on a life of crime. One thing eventually leads to another and Carlos shoots a man during a robbery. An accident, met with his usual indifference, which serves as a gateway to other murders.

Lorenzo Ferro is fitting as Carlos, made up to look effeminate and androgynous. He gives a performance that showcases the young man’s unhinged nature while still portraying the cold, uncaring emotion of a sociopath. Chino Darín is also good as Ramón, who sets his eyes on getting out of crime and into the limelight, much to his parents’ chagrin. Sexual tension is thick between the two, becoming most apparent during a jewelry store robbery where Carlos tries on a pair of earrings and the two mug in front of a mirror with their guns, drawing thoughts of Bonnie and Clyde. The roles of the parents are finely acted with Cecilia Roth standing out as the distraught mother.

The cinematography is good minus a few distracting moments. At times motion looks odd, like frames have been dropped or the camera hasn’t properly captured the action, probably some random digital anomaly from the equipment used. Other than those fleeting moments, the camera work is great. There are a few well timed tracking shots and the framing is always well done. Cinematographer Julián Apezteguia includes some grotesque close ups throughout, the before mentioned shot of José and a shot of Ana sensually wiping a layer of water from Carlos’s lips as she comes on to him. These shots act to further develop both characters and their inappropriate relationship with Carlos.

This movie isn’t without its share of problems, mainly pacing. The film gets off to a good start but begins to fizzle out before reaching the end. Nothing specific comes to mind, but the final 30 or 40 minutes had more than a few scenes that felt like they went on too long. Some of this is from the inclusion of sub-plots that don’t go anywhere and moments that don’t fit with what’s previously been shown. A scene toward the end shows Carlos crying although he’s shown almost no emotion, other than giddy excitement and lust, the rest of the movie. This introspective moment is out of place with how the character has been portrayed up to this point.

Ortega’s film, despite its problems, is one of the better movies to be released this year. Although Argentina has selected El Angel as their official selection for Best Foreign Film at the next Oscar ceremony, the movie has been released unrated meaning that publicity for it is next to zero.
(Review by Bret Oswald)