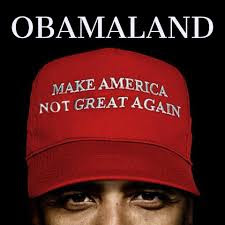 In the year 2040, Barack Obama (Chris James, adopting the tone and inflection of the real man, then leaning too heavily into both) is entering the 34th year of his Presidency for Life, and the nation over which he presides, once known as America, has radically shifted. The idealistic change that was once his campaign platform and poster-ready slogan has become something resembling a dictatorship, although he boasts to everyone, far and wide, that it isn’t a dictatorship. His ideology, feared to be socialist by the political right, is about to become a literal weapon against those who refuse to distribute everything equally.

This is the comic premise of Obamaland, a political satire steeped in science fiction that takes its name from the new one for America. Director Greg Bergman’s screenplay goes too far with that premise, though, in various ways, and whether it was intentional or not, the undeniable feeling elicited from the filmmaker’s treatment of this material is that it was borne from the political ideology it apparently seems to mock. There doesn’t seem to be the remotest sense of understanding the modern world, the ideas behind the birtherist conspiracy theories that certain public figures pushed in public venues, or even storytelling.

The hero of the story is Tinder Tucker (Isaac Anderson), who discovers that his girlfriend has come out as genderqueer, pansexual, and form-positive. Horrified by their newly realized gender identity and sexual orientation – yet, conversely, accepting of his friend Ebony’s (John McLaughlin) “ethno-gender reassignment” from white man to black woman – he goes on a journey of self-reflection. Along the way, he falls in with the Trumpublikans, a group of political dissidents who protested Obama’s refusal to abdicate the commander-in-chief position to Donald Trump in November 2016.

The Trumpublikans idolize and worship a white, virginal woman known as “The Great Hope White” (Christina Leidel). She is something of a legend or a myth to most of this persuasion, but some unknown influence inspires her to come out of hiding. Growing closer to Tinder – and, in one scene, propositioning him for sex by telling him, “I want your genitals inserted into my genitals,” as one does before a little sexy time – Hope rallies a legion of troops for some sort of battle to end Obama’s tyranny once and for all. In case you are following closely, yes, the aggressive and violent militia are the heroic ones here.

Meanwhile, the film’s view of everyone else barrels through any line of good taste. Obama and his nearly all-black advisors (most of whom are in Black Panther garb), with the exception of a groaning skeleton in the place of Nancy Pelosi (one of the handful of jokes that even come close to working), are barely seen outside of a context that establishes them as mustache-twirling villains. The citizens of Obamaland are sort of ultra-Millennials, patronizing a coffee shop that asks if white customers want to “check their privilege” for an “Obama buck” (just one example of the bizarre view of the culture right now that instantly dates anything the movie is trying to say).

This is an embarrassing failure of nerve, courage, conviction, and the simple rules of filmmaking and storytelling. The comic aspects are childish and inane, largely established at the expense of marginalized people (in particular, people of color, who are broad stereotypes, and the queer community at large, who are all seen as rather terrifying and alien). There is no other level to Obamaland, though, and if the film is embarrassing on that simple level, it should tell you how it is as a collective experience, too. Here is satire without focus, purpose, good taste, or common sense.
(Review by Joel Copling)