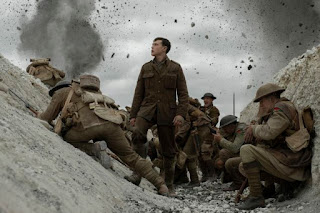 1917
**** (out of ****)
1917 is an exhilarating experience, and that is only in part due to the technique employed by co-writer/director Sam Mendes, cinematographer Roger Deakins, and film editor Lee Smith. That technique, by the way, is to present its central narrative as one take, interrupted only at a certain point at which one of our two young soldier protagonists is knocked out cold by a downstairs fall. This is technically built, then, to be two long takes, following a pair of soldiers who have been tasked with the mission of upending a frontal assault that has been designed as a trap to massacre 1,600 men. That is the extent of the plot, as written by Mendes and Krysty Wilson-Cairns, and one could argue that it has a lot in common with the first-person-shooter, war-themed video games of recent and not-so-recent years.

One might anticipate that the film will come out strong with a huge bang of action, but instead, Mendes is patient at first. Lance Corporals Schofield (George McKay) and Blake (Dean-Charles Chapman) are simply lounging and dozing in the sun, taking a break from the stress of combat, until they are called into barracks to receive a new assignment from their superior officer, General Erinmore (Colin Firth, who is one of a number of familiar faces making single-scene cameos of tremendous importance). It seems that at the front of the line, where Blake’s brother (played by Richard Madden in, once again, a single heartbreaking scene) is currently stationed, an assault is being prepared against insurgent German forces.

The Germans, however, have cottoned onto that plan, and the assault has been carefully maneuvered to bring victory to the other side. For the two soldiers in general, the mission must be a success by way of saving as many men as humanly possible, and for Blake specifically, it means the potential loss of his brother. The opening sequence – if one can call it that and not mean the entire first half – does a whole lot, then, beyond simply introducing the premise and mission statement: It announces this film’s chosen technique as the first of many bold decisions. By presenting war as an unceasing series of events, moving from one to the next without (until that interruption, of course) giving us a break from the action, Mendes and Wilson-Cairns have repurposed the fog of war as looking more like a roller coaster.

That, though, is still being easily reductive about the film’s considerable technical accomplishment, which somehow both intensifies the explosive nature of combat and also narrows our focus on the two heroes, whose journey takes them into the grime and muck of the war’s immediate aftermath. They find themselves in a giant pit, where bodies decompose in a giant puddle of refuse and filth, and on an abandoned battlefield, where countless shells lie next to the guns that fired the ammunition inside them. Perhaps the best scene in the first half takes place at a barn, where a plane crash reveals just how seamless the film’s mixture of digital and practical effects (as well as the splicing of shots able to make this seem like a single take) truly is.

Then the story turns considerably, shifting its focus onto one of this pair, as he makes his final movements toward the front of the line, where a commander (played by Benedict Cumberbatch, in perhaps the film’s best cameo performance) must face the futility of his efforts and the transience of such orders from the upper echelon. It is a note of exhaustion, and perhaps the only time since those opening moments of restful bliss in which our stress level is allowed to drop a bit. It is reductive, then, to say that 1917 feels like a video game strategy session. Instead, this is war as a ticking clock, and one doesn’t want the clock to reach zero.
(Review by Joel Copling)