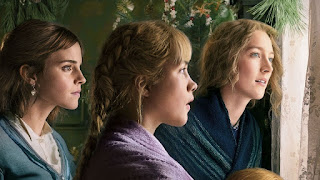 Based on Louisa May Alcott’s classic 1868 semi-autobiographical novel, Little Women is a coming-of-age drama, in its eighth film adaption, that tells the story of the four March sisters in America during the aftermath of the Civil War. Greta Gerwig both wrote and directed this film in her second solo directorial feature.

Saoirse Ronan, who also stars in Gerwig’s debut solo directorial feature, gives an incredible performance as the lead character, Josephine “Jo” March, earning her a Golden Globe nomination for Best Actress in a Motion Picture-Drama, an award she previously won in 2017 for Greta Gerwig’s previously mentioned, Lady Bird. Ronan has been noted for her roles in period dramas over the past several years, making her an ideal choice by Gerwig. Ronan’s character is an aspiring writer that rejects the idea of marriage and romance in both her life, and her writings.

This is in contrast to her youngest sister, Amy March, played by Florence Pugh, who once again demonstrates her ability to play a wide range of characters throughout her five-year-long film career. Amy March is both the baby of the family, and the least mature, who dreams of becoming an artist one day. Emma Watson of the Harry Potter fame, plays the eldest sister, Margaret “Meg” March. Meg who is often considered the most beautiful, also does not share in on her sister Jo’s views on marriage and instead aspires to become a wife and mother, hoping to fulfill her domestic duties someday. Eliza Scanlen plays the final sister, Elizabeth “Beth” March. Beth is a shy, kind girl, and is considered to be the musical sister, as she loves the piano. She is the only sister who does not have a desire to leave home. Scanlen does not necessarily deliver a poor performance, but it is definitely outshined by the actresses playing the other March sisters, primarily Ronan and Pugh. This may be in part to Scanlen being a relative newcomer to the silver screen, as this is her first year working in film.

Robert March, played by Breaking Bad’s Bob Odenkirk, is the father of the March family and the only male in the household. Generally considered a comedian thanks to his work as a writer on Saturday Night Live and his primarily comedic roles, Odenkirk has recently been taking on more serious roles, including his role here. Unfortunately, we do not get to see much of Odenkirk’s ability as a dramatic actor due to his character not getting much screen time since father March is away for much of the film. This leaves the mother of the March family, known as Marmee, to lead the household. As expected by her numerous accolades, Laura Dern gives a wonderful performance as mother March.

Of course, you cannot forget to mention Meryl Streep who plays Aunt March, a rich widow who believes a woman should always marry, and most importantly marry rich. She is rather judgmental at times and is very much stuck in her beliefs about the superficial aspects of society’s ways that were common during that time. Streep nails the role combining the perfect amount of stubbornness, harshness and general dislike for others who differ from and/or are less fortunate than her, mixed with a hint of compassion and topped off with some dry humor. Rounding out the cast is Timotheé Chalamet who plays Theodore “Laurie” Laurence, the rich neighbor who lives with his grandfather and fancies Jo. Chalamet also worked with Gerwig and Ronan in Lady Bird, again delivering a stellar performance. Chalamet has made a name for himself as a young actor on the rise, with this role further enforcing that idea.

Little Women is not only being recognized for its all-star cast, but its musical score as well. The original score has been nominated for numerous accolades, including a Golden Globe. Having just been adapted for film a year previously, there has been some doubt as to whether or not there was a need for another film adaption, especially after the mediocrity of the 2018 adaption. To the skeptic’s relief, Gerwig’s adaption is the movie the last adaption should have been. Although the non-linear timeline can be confusing at times to those not familiar with the story, this is made up by Gerwig’s amazing storytelling and ability to keep the viewer entertained for the entire 135 minute running time. Little Women premiered at New York City’s Museum of Modern Art on December 7 and will be theatrically released for general audiences on Christmas Day.

Although this film can be appreciated by both genders, Little Women is definitely targeted more towards a female audience, making it an ideal alternative for the females while the boys are watching a film in a galaxy far, far away. Rated PG for thematic elements and brief smoking.
(Review by Alyssa Lurvey)