Jumanji The Next Level 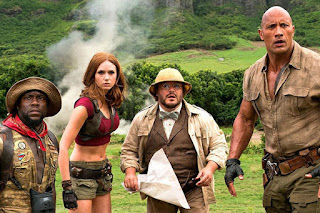 “Jumanji: The Next Level,” directed by Jake Kasdan, tries to differentiate itself from the previous movie while attempting to recapture its predecessor’s success. It succeeds at neither. While “Jumanji: Welcome to the Jungle” was a fun update to the original film, the majority of this movie is, to put it bluntly, fairly dull, dryly trying to come across as fresh but falling flat on its face.

After successfully navigating their way through Jumanji, Spencer (Alex Wolff), Martha (Morgan Turner), Bethany (Madison Iseman), and Fridge (Ser'Darius Blain) have moved on to another challenge – college. With the holidays approaching, they each return home from their respective schools, planning a get together at a local café. Spencer, unlike the others, doesn’t seem to have the knack for school, losing the self-esteem he gained through their excursion in Jumanji.

Looking to bolster his confidence, Spencer re-enters the game, forcing the rest of the gang to follow him but the game – broken into pieces in the previous movie, now hastily put back together by Spencer – is malfunctioning. In addition to the teens, it sucks in Spencer’s grandfather, Eddie (Danny DeVito), and his grandfather’s friend, Milo (Danny Glover). The group, now hindered by the addition of Eddie and Milo (and their bad comic relief), must once again fight their way through a perilous adventure.

This sequel also sees the return of the avatars from the previous movie – Dwayne Johnson as Dr. Smolder Bravestone, Jack Black as Dr. Shelly Oberon, Kevin Hart as Mouse Finbar, and Karen Gillan as Ruby Roundhouse. Instead of returning the same players to their previous avatars, the writers (Kasdan alongside Jeff Pinkner and Scott Rosenberg) have changed things around, inserting players into different avatars. While Martha is still Ruby Roundhouse, Eddie is now Smolder Bravestone, Milo is now Mouse Finbar, Fridge is now Shelly Oberon, and Bethany is a horse. They later find Spencer as a new avatar, the pickpocket/thief Ming (Awkwafina).

The change up in characters allows the cast to show their acting range. For Hart and Johnson this means trying to act like old men. Neither actor manages to completely sell the transformation, coming across as annoying caricatures more than anything. The jokes written for them wear thin and quickly grow stale. Black shows his impressive acting skills, successfully managing to portray his new player’s personality. Fridge, an athlete, is not at all happy about being the out-of-shape map-reader. Awkwafina is also impressive in her role. She successfully captures the jitteriness of Wolff’s Spencer.

As expected, the characters are forced to face multiple obstacles as they play the game including ostriches, mandrills, and a ruffian named Jurgen the Brutal (Rory McCann). Their perils don’t do much to bring the audience to the edge of their seats. As with the previous movie, this is once again, in part, because we know they are in a video game; the characters don’t feel like they are in any “real” danger. The audience only knows from hearsay that if they die in the game, they die in real life. There’s no way for the characters to know for sure unless one of them actually does die in the game, which won’t happen in a family geared adventure movie. The sense of urgency from the original movie, in which the board game escaped to the real world, is absent. On that same note, the effects vary from decent to mediocre, bringing to life the various animal attacks and environments to varying degrees of success.

The movie does finally find a groove in the final thirty minutes, displaying some energetic fun that’s absent through the first 90 or so minutes. But by then, the damage has been done. The filmmakers try their best to make the movie look and feel like a video game. In that, they do succeed, but “Jumanji: The Next Level” is about as much fun as watching someone else play a video game. In short, it’s not much fun at all. And to top it all off, they leave the movie open for yet another sequel. Yay…
(Review by Bret Oswald)

Email ThisBlogThis!Share to TwitterShare to FacebookShare to Pinterest
Labels: Bret Oswald, Jumanji The Next Level review