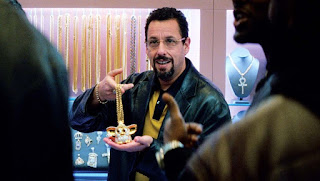 The protagonist of Uncut Gems is a compulsive gambler and a professional liar. To be clear, Howard Ratner is not a good man, but as played by Adam Sandler in one of the actor’s all-too-rare dramatic performances, he is also something of a pathetic loser. It means that, to the degree that his troubles are both self-imposed (because he is self-obsessed and arrogant) and beyond his control (because he rubs the wrong people the wrong way at the wrong time in this story), it isn’t hard to feel for the guy just a little bit. He is the personification of the concept of toxic masculinity, but through the simple expedient of Sandler’s performance, which is multifaceted in many fascinating ways, he also isn’t entirely unworthy of our sympathy.

Howard is a jeweler living and hustling in or near the diamond district of New York City. Something about the atmosphere and milieu developed by sibling co-writers/directors Benny and Josh Safdie suggests that Sandler, as Howard, is mostly surrounded by the real jewelers of this district, which, of course, resides between Fifth Avenue and Sixth Avenue in Midtown Manhattan. We recognize that some of these faces are those of professional or, at least, semi-professional actors inhabiting this space with Sandler, but some of these dealers and other figures seem to be the genuine article, and it is a testament to the skill of the actors dropped into this scene that everything seems instantly (but relatively speaking) naturalistic.

Howard owes people money, and he also loves to gamble that money away before it reaches its intended target. The plot here, set in 2012, primarily surrounds a bet he has made on professional basketball player Kevin Garnett (playing a version of himself in what must automatically be the best onscreen performance ever given by a basketball player) to guide the Boston Celtics to a win in an upcoming game. A problem arises when this bet rubs up against an agreement Howard has already made with Arno (Eric Bogosian), whose relationship to Howard is kept as something of a secret further into the story. Arno’s own bookie Phil (Keith William Richards) is quickly losing patience with Howard.

Facilitating the agreement with Garnett is a trade-off: Garnett will wear a black opal, a rare mineral found in Ethiopia which has been Howard’s obsession for the last year of his life (and is the subject of a short prologue that depicts its discovery – at the cost of a miner who receives a gruesome leg injury in the process), and offer his own championship ring as collateral. Howard, of course, immediately delivers this ring to a pawn shop, with the intention of picking it up later in the week, in return for money he can bet on Garnett. The details, of course, are borderline-inconsequential to those not intimately familiar with the closed world of jewelry and betting, but the Safdies and co-screenwriter Ronald Bronstein are successful in at least affording it some emotional logic.

Howard’s obsession has led him down a path of self-destruction. It has isolated him from his wife Dinah (Idina Menzel) and two children (whom we barely see), as he has sparked up an affair, of which Dinah is fully aware, with his assistant Julia (Julia Fox). It has gotten him in hot water with Arno, as well as Garnett’s own assistant Demany (Lakeith Stanfield), an associate of Howard, who allows him to stash some expensive watches in the jewelry store’s safe. Howard, of course, loans out those watches because, again, this is a desperate man, prone to his own compulsions and mistakes. Howard’s tour through New York nightlife brings him into the vicinity of some interesting characters – some real (In addition to Garnett’s appearance as himself, rap musician The Weeknd shows up and makes the mistake of advances toward Julia) and some imagined by Bronstein and the Safdies (Howard’s father-in-law Gooey, played by Judd Hirsch, acts as his proxy of sorts in a crucial auction that has unintentional consequences).

The proceedings here are, not to mince words about it, terrifying, mainly because editors Bronstein and Benny Safdie are entirely unwilling to allow the audience any time to breathe during the events of this story. Uncut Gems keeps ratcheting up the insanity, and since there are a few moments here and there that adopt a kind of stabilizing calm (usually when a character goes quiet or when Howard, put in the unlikely position of doing so, owns up to his own faults), the filmmakers, in collaboration with cinematographer Darius Khondji’s harsh compositions and composer Daniel Lopatin’s unearthly score, reveal themselves to be in complete control of every element.
(Review by Joel Copling)