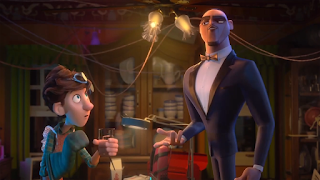 “Spies in Disguise is an action-packed film suitable for kids.”

If you’re looking for a review for an awesome action-packed, overrated film, you came into the wrong website, Spies in Disguise is an animated comedy children’s movie with awesome action-packed adventures that have grown closely resemble or serves as parody to Mission Impossible, James Bond, and Indiana Jones. The film serves as a directorial debuts for the duo; Nick Bruno and Troy Quane and is loosely based on Lucas Martell's 2009 animated short Pigeon: Impossible. Will Smith and Tom Holland came to the animated film world, teaming up together as Lance Sterling and Walter Beckett.

Spies in Disguise focuses on the Lance Sterling, known as the greatest spy in the world, whose main goal is to save the world from any threats all over the world. He is later reluctant to work with the teenage scientist named Walter Beckett who designs colorful, yet playful gadgets that could change his life. However, when Beckett experiments his newest creation to Sterling that involves disappearance and concealment, Sterling accidentally consumes Beckett's experimental creation, which turns him into a pigeon. With that, Sterling must figure out how to save the world from any enemies while being a pigeon during the mission.

The chemistry between Smith and Holland’s characters brings a fascinating display of collaboration on adventurous and perilous events compared to such ironic duos like Pinky and the Brain, Indiana Jones and his father from The Last Crusade, Marty and Doc from Back to the Future, Batman and Robin, and others. Their relationship each other really builds up character development exquisitely as well as understanding the principle meaning of friendship and not working alone is (definitely) part of the basics for the film’s dynamics and the story as a whole.

Also appearing in this film are Rashida Jones, Karen Gillan, and DJ Khaled in their supportive roles while Ben Mendelsohn portrays the main villain of the film as a powerful technology-based terrorist mastermind whose plans on world domination and killing several agents along the way.

For the film’s direction, Nick Bruno and Troy Quane knows how to keep plot twists and the storylines flowing without a blink of an eye. They both have put much effort on crafting this spy comedy film with loads of laughter, strong character developments on Sterling and Beckett, putting more animated action-sequences to it with exquisite CGI, and building up resemblances from any other spy films that will serve as higher advantages for a spy film genres. Even the Scooby-Doo jokes seem to be hilariously ludicrous.

Out of all the colors present in the film, Spies in Disguise is okay. Though, I do have high respects on Will Smith and Tom Holland and their performances from the film. It’s not a bad movie, but I believed this is a choice one for kids, but for adults, not so much. Spies in Disguise is an engaging course that fully delivers everything the world needs.

Just to let readers know that Spies in Disguise is the first official release by Blue Sky Studios under the subsidiary of The Walt Disney Company after the acquisition of 21st Century Fox earlier this year.