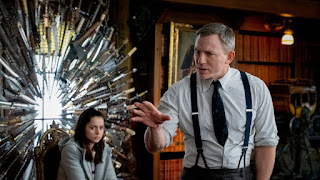 “Knives Out” (2019) -- I am not a proponent for murder, but when it’s done with the right sardonic tone and manner, I am all in. One that tried to do it was “Very Bad Things,” (1998) the tale of a bachelor party that goes awry I the absolute worst way for everyone involved. It was actor-turned director Peter Berg’s first attempt at a sardonic tale with a mean bite that missed the mark. It was just plain mean. I gave it a C- when I originally saw it.

Now, with “Knives Out,” director Rain Johnson has crafted a witty comedy that proves just how despicable people can be when it comes down to inheritance and the almighty dollar.

Another one that falls into that same vein is a tale about rich over privileged spoiled kids attempting to off their parents in 2011’s “You’re Next.” Like “Very Bad Things,” it was just too mean spirited. That chalks up a C on my A-F scale of grading movies.

Oscar winner Christopher Plummer “The Sound of Music,” “The Beginners” and “All the Money in the World” is the patriarch of a wealthy publishing family.

His name is Harlan Thronbey and he has a strange relationship with confidant Marta Cabrera (Ana de Armas (“Blade Runner 2049”). The pair are in a close plutonic relationship.

Harlan trusts her more than the vicious family members circling around like a group of thirsty vultures waiting for Thornbey to keel over at any moment.

The trouble is everyone is in it for their own selfish interests. This includes Don Johnson’s first son, Richard Thornbey.

Like the masterpiece that was Bryan Singer’s Oscar-winning “The Usual Suspects” (1995), a well-crafted pretzel-twisting suspense thriller with one of the best endings of this past decade.

Craig is aces as Blanc, who is altogether skeptical of everyone in Harlan’s extended family. He knows something is amiss, but he does not want to stir the pot too much to bring up the refuse into the surface.

He strikes up a kinship with Matta, who wants to help with Harlan’s death.

“Knives Out” is an entertaining as well engaging yarn that fully delivers everything in its entangled web.