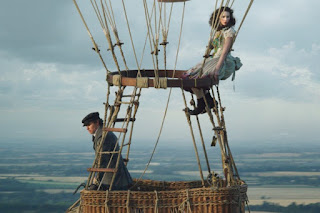 A meteorologist, James Glaisher (Eddie Redmayne), and a balloonist, Amelia Wren (Felicity Jones), take to the skies for the advancement of science in director Tom Harper’s “The Aeronauts.” Inspired by Glaisher’s real-life 1862 flight, which he undertook with balloonist Henry Coxwell (who’s not even mentioned in the film), “The Aeronauts” is not exactly true to history. Still, as it balances between the duo’s 90-odd minute flight and their backstories, it’s a compelling movie.

James is an outcast in the scientific community. His ideas and theories are frowned on by his contemporaries who believe that being able to predict the weather is ridiculous tomfoolery. The scenes depicting James’ belittling by his colleagues are handled in clichés but don’t do much to damage the flow of the movie which, despite its recognizable cast, can’t help but feel like a direct-to-video work. On the other hand, Amelia, an amalgamation of real-life figures, is a daredevil. She’s got panache and grit, two characteristics in which James is sorely lacking.

As the film begins, the pair are preparing for their take-off – an organized event staged for thrill-seeking spectators. James is getting his instruments ready while waiting for Amelia. One of the funders is growing anxious as menacing clouds roll in and Amelia is missing. She is en route to the launch site with her sister, running late due to having a sudden anxiety attack spurred by memories of her last air flight which ended in tragedy. She finally overcomes her nerves and manages to put on a show for the viewers. James isn’t happy about this, but Amelia understands it is necessary.

A series of troubles befalls them once they are in the air, beginning with an encounter with a storm. Glaisher is intently focused on his research while Amelia is concentrating on navigation and their safety. As their voyage continues, Harper cuts back to events preceding the balloon’s launch, including James’ attempts to secure funding and convince Amelia to join him, while Amelia battles her reluctance to return to flying.

The flashback scenes are nothing remarkable but they do manage to be more interesting than most of the events depicted in the balloon. I guess I find it hard to be wowed by scenes that were more than likely shot in front of a green-screen and enhanced by computer effects. The costumes look good and the film is nicely photographed, but again nothing really stands out about it.

“The Aeronauts” builds to a climax that’s meant to be edge-of-your-seat entertainment as the pair try to control their rapidly ascending balloon. It doesn’t quite work, again due to the obvious green screen work, but it still manages to convincingly portray their troubles. Ultimately, this was an engaging movie, but it didn’t quite manage to win me over. I thought it was well-acted and well-paced but somehow still felt like a subpar production.
(Review by Bret Oswald)