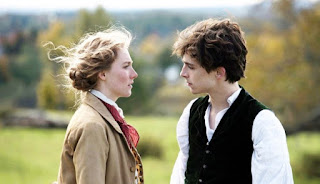 LITTLE WOMEN
**** (out of ****)
In her adaptation of Little Women, writer/director Greta Gerwig reveals enough of an understanding of Louisa May Alcott’s novel to tell its story out of chronological order. This is important to note because the original text was, at least for its time, surprisingly contemporary. To mirror that for today’s audiences, Gerwig and editor Nick Houy structure the tale to shift back and forth between the two major timelines in the narrative without much in the way of an announcement when each shift occurs. One of the few things that announce we are in one of these periods in the story of the March sisters, living in Massachusetts just after the Civil War, is a slight deviation in cinematographer Yorick Le Saux’ compositions.

The segments set in the relative present have a bluish tint to them, in order to complement the sadder features of this side of the story, and there is also something different and more mature in the hairstyles and general demeanor of the sororal quartet at the center of this tale. It makes perfect sense as a choice, too, given the events of the latter chronological half of the story, which is generally more somber and less celebratory than what comes before. Meanwhile, Le Saux floods everything with oranges and brightness in the first chronological half, which places seven years in the past. Right from the start, then, Gerwig is using the elements of filmmaking to communicate the emotion of the stages of Alcott’s story, and that sets this adaptation apart from, and perhaps slightly above, the many previous ones.

Those familiar with the novel will know the sisters’ names by heart. For posterity, though, and by descending order of age: Meg (Emma Watson) once had aspirations to be a stage actor but came to realize her duty to the tradition of women in this era to marry well and to gain a bit of status. Jo (Saoirse Ronan), the central character of the sisters, is disillusioned by love and wants to be a novelist, positioning her latest book (which is basically Alcott’s novel itself but with a different name to throw people off) to be published but to belong to her. Amy (Florence Pugh) wants to be a great artist and travel Europe, and Beth (Eliza Scanlen) is a pianist of great talent, cursed by chronic illnesses.

Their mother Marmie (Laura Dern, a treasure as always) raises them singlehandedly as their father (played by Bob Odenkirk) is off on various fronts near the end of the war. Each girl has a task ahead of them, and Jo’s is primarily to care for their aunt (played by Meryl Streep, doing her thing pretty well). When Jo meets Theodore “Laurie” Laurence (Timothée Chalamet), an attraction develops, but through extended accidents of timing, a relationship never develops. Readers of the novel will remember that this portion of the story was far more about attitude and character development than plot, mostly serving to set up the movements of something of a plot in the later segments.

When that plot moves to the relative present, we find the characters have mostly achieved their goals, though at a cost: Meg has married John (James Norton), a penniless tutor, and had children she is unable to support alone. Jo is a writer, still struggling to publish a book (A very funny Tracy Letts cameos as a publisher who wants her novel to end with either the marriage or death of its female protagonist) while teaching at school, where a handsome professor (played by Louis Garrel) catches her eye. Amy is touring Europe, having achieved minor success as a portraitist and realized her love for Jo’s old beau Laurie. Through tragedy, these three find themselves back home, where their reunion is for somber reasons: Beth’s bad luck with health has, of course, caught up with her.

Gerwig handles all of this with a contemporary ear for the formal and floral language of a much older generation and a sense not to drown the proceedings in the melodrama one might anticipate from an adaptation of a novel from this period. The starry cast – but especially Pugh (with her exceptional read of Amy as one who pouts with purpose) and Chalamet (whose classical training was preparing the actor for this performance, it seems) – are a major factor in making this mixture of old-fashioned drama and contemporary comedy of manners work as well as it does. Little Women is a triumph of tone management and achieving a hard-to-attain aesthetic immediacy.
(Review by Joel Copling)