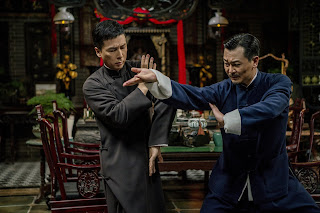 The first of the Ip Man series came out in 2008 telling the story of Bruce Lee's Wing Chun master in Foshan, the hub of Southern Chinese martial arts. The independently wealthy Ip Man spent his days practicing and living a quiet life, while occasionally having competitions with other masters of different fighting styles. It was the 1930's and the Japanese invaded China forcing Ip Man to fight for justice before fleeing to Hong Kong. The 2nd movie, Ip Man opens a Wing Chun school but has to deal with other martial art masters and meets Bruce Lee who asks to be his student. The 3rd film has Ip Man fighting with Mike Tyson. Now the last of Ip Man's journey brings him to San Francisco invited by Bruce Lee (Danny Chan) who has drawn the ire of the Chinatown masters at the Chinese Benevolent Association (CBA) who think martial arts should only be taught to Chinese.

Donnie Yen is back as Ip Man now older who has discovered he has neck and head cancer. His wife had already passed from cancer and their son has been expelled from school for fighting. Ip Man has refused to teach his son martial arts which has made the young teen very rebellious. Bruce had sent an invitation to a Martial Arts demonstration in San Francisco where he just opened his 2nd school outside of Seattle. Ip Man decides to maybe check out the schools for his son. But the CBA Chairman Tai Chi Master Wan (Wu Yue) refuses to write the necessary letter of recommendation unless he gets a quid pro quo from Ip Man to stop his protégé.

Screenwriters Edmond Wong, Dana Fukazawa, Chan Tai Lee, Jil Leung Lai Yin loaded the story with several subplots that offer some political, racial and economic issues of early 1960's America. Bruce Lee's student Marine Staff Sergeant Hartman (Vanness Wu) wants to introduce Chinese Martial Arts to their hand to hand combat skills. But as usual, the Karate instructors Colin (Chris Collins) and Gunnery Sergeant Geddes (Scott Adkins) has Hartman defeated by Colin using Karate against his Kung Fu. Chairman Wan's daughter Yonah (Vanda Margraf) who attends an exclusive private school is bullied by a fellow cheerleader and her cohorts who are then confronted by Ip Man. Becky complains to her father who is and INS officer who decides to bring in all the CBA masters under some trumped up charges.

Director Wilson Yip and superstar fight choreographer Yuen Woo-ping bring together some exciting and kick butt battles which as always features the Chinese fighting styles against Japanese Karate. Tai Chi Master Wan manages to give as good as he gets against instructor Colin, but Ip Man's Wing Chun style that rises to the top. Scott Adkins Gunny Sergeant spews some colorful bigoted white supremacist nonsense surrounded by American and USMC flags while denigrating the Marine recruits, but even he can't overcome the cool as a cucumber Ip Man. There is nothing more satisfying than Ip Man using his machine gun punching style on the stereotypical bad guys in all these films. Eventually the Marine Corp started using Chinese Martial Arts in it's training.

Ip Man passed away in 1972 leaving behind a legacy that Bruce Lee has helped make possible. It was a nice touch to see some scenes from the previous films. It's a given that a Ip Man marathon is probably a good idea before heading out to the theaters to see this fitting ending to a life well lived.
(Review by reesa)