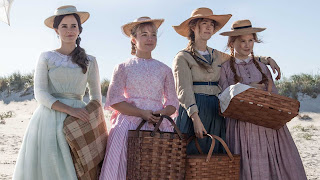 Writer/director Greta Gerwig’s adaptation of Louisa May Alcott’s “Little Women,” while ambitious, falls into misguided territory. In bringing the classic novel, once again, to the screen, Gerwig has taken it upon herself to change the structure of Alcott’s book, putting her own spin on the story. The film begins with the four March sisters in early adulthood. Jo (Saoirse Ronan) is in New York City hoping to become a writer, Meg (Emma Watson) is married with two young children, Amy (Florence Pugh) is in Europe with their aunt (Meryl Streep) studying art, while Beth (Eliza Scanlen) still lives at home with their mother, Marmee (Laura Dern). The main characters and their personalities are quickly, and effectively, introduced in this opening segment.

After briefly setting the stage, Gerwig flashes back seven years. This is where the movie’s problems start to arise. Instead of using different actresses to portray the characters in their younger years, Gerwig uses the same actresses – Gerwig also uses Timothée Chalamet to play their neighbor Laurie, who’s hopelessly infatuated with Jo, at both ages. Honestly, using older actresses to play younger characters isn’t the issue, it’s the way the movie is structured. Instead of presenting the material in a chronological fashion, it is presented in the style of films like “Memento” or “Pulp Fiction,” zig-zagging between past and present, unnecessarily complicating the material. It’s like Gerwig has thrown the book into a blender then pieced the story back together.

The characters are clearly defined, in both time periods, but it can be hard to tell what time period we’re currently viewing. There are visual cues – for instance, the length of Jo’s hair – that aid the viewer but they aren’t always enough. At times it takes a while to pick up on a time shift, which feels unnecessary since it doesn’t add anything to the story’s delivery. Gerwig combines the past and the present so that emotional climaxes from each time period happen simultaneously. You see how events play out when they were children followed by, or intercut, with similar events in the present. As a result, neither the past nor the present totally resonates. In telling the story out of sequence, Gerwig robs it of its character-building capacity and emotional punches.

I don’t think the problem with this movie is that twenty-something year-olds are playing teenagers. The problem is that by jumping around in time, Gerwig makes it hard to know what age the characters currently are and what time period we’re dealing with. The actresses do a good job of portraying teenagers, most specifically Pugh who steals the show and seems to be having a gleefully good time playing the mischievous Amy. While we can buy into seeing these women as children, it becomes challenging when they are simultaneously presented as a child and an adult.

It’s not all bad news for this version of “Little Women.” Gerwig does a fine job of structuring her visuals. Scenes are thoughtfully laid out in a visually pleasing manner. There’s often a stagy, theatrical look to the film. One clear example is a scene of Marmee reading a letter to her daughters. Ronan, Watson, Pugh, and Scanlen are stylistically placed around Dern as she sits in a chair, all looking at her with the adoring eyes of young children. On the note of visuals, the costumes and set design also look fantastic.

“Little Women” has been made multiple times so it’s understandable that Gerwig would want to do something to differentiate her version. It’s unfortunate that it doesn’t work well because there is quite a bit to like here as well. This is worth watching for its technical aspects and Pugh’s fantastic performance, just don’t expect to be totally absorbed into the story.
(Review by Bret Oswald)