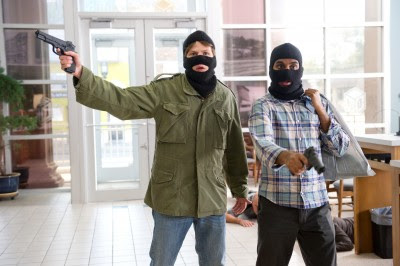 Nick is a pizza delivery guy who is a slacker and pretty much aimless without any particular ambition. He lives with his childhood friend Chet a middle school teacher and he is secretly seeing Chet's twin sister Katie. Also in Grand Rapids is overly arrogant Dwayne and his “business partner” Travis who spend their time blowing up and shooting at watermelons. Dwayne is the useless egotist son of a retired Marine Major who's harsh and unrelenting attitude is what provokes Dwayne and Travis to plot his demise. Thus, the adventure is set up for the bromances to collide.

There's a small moment when Nick (Jesse Eisenberg) makes a comment that he's not on Facebook in a very self aware wink wink nudge nudge reference to his turn in The Social Network. This story by Michael Biliberti and Matthew Sullivan is filled with other film and pop culture references as if people live their lives acting out scenes from movies. Nick and Chet (Parks and Recreation's Aziz Ansari) have just broke up after an argument over Nick sleeping with his twin sister at their graduation some 8 years ago. Meanwhile Dwayne (Danny McBride) is commiserating with stripper Juicy (Bianca Kajilich) about how the Major (Fred Ward and looking really fit) had won 10 million lottery is down to a million and he can't wait to inherit it. Juicy says her friend Chango (Michael Peña) can help him make that happen for $100,000. The only way that Dwayne and Travis (Nick Swardson) can figure how come up with the money is to rob a bank. Their plan is to disguise themselves in gorilla masks to kidnap a random pizza guy, wire him with explosives and have him do it for them.

Somewhere along the way it has become very popular for movies to feature immature male friendships filled with curse words for dialogue. Director Ruben Fleischer managed to make foul language work in the infinitely superior Zombieland because what else can you say when you are dealing with the undead. But listening to these unlikeable characters mouth off in middle America is annoying and tiresome.

Dwayne's dream of what he would do with his inheritance would be to open a tanning salon prostitution ring. He tells Travis that he would run the front desk where customers would have to use code words to order just a tan or a sexual peccadillo. Travis isn't a bright light but is aware of Dwayne's increasing mania. Eisenberg doesn't have much to work with in Nick who doesn't seem to have anything going for him in his life besides renting movies and drinking beer after work. Chet at least has a job. The ensuing hits and misses of comedy and violence doesn't always work. The timer is running on the bomb clock, yet Nick is running around making last minute confessions to Katie, buying robbery supplies at the dollar store, and quitting his job. The scene stealer because this film really needs one is Michael Peña's hitman who calls himself the “Titanic Hispanic”.

The concept of the bomb vest has some resemblance to a real robbery in 2003 and the unfortunate pizza delivery guy was killed in a blast, although the filmmakers claim they have no prior knowledge of the event it may seem in poor taste to those involved in the case. There are some amusing moments that will no doubt entertain a market group of teen males. For other's wait for the dollar Red Box rental.
(Review by reesa)

Posted by Dallas Movie Screenings at 2:09 AM

Email ThisBlogThis!Share to TwitterShare to FacebookShare to Pinterest
Labels: 30 Minutes or Less review