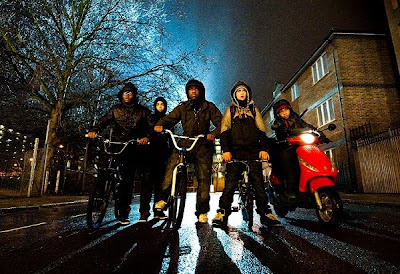 In South London a nurse walks home to the estate, what they call housing projects in Britain. She's mugged by a gang of teens who steal her purse and cell phone before threatening her with a knife attempting to steal her ring. Just as she was about to take it off something falls from the sky and crashes next to them. She runs off while the gang leader rummages through the debris of the crashed car looking for valuables. Suddenly he's attacked, but he's quick with his knife and stabs it. Whatever it was runs away with the teens quickly following. What they find is something about the size of a dog and weird looking. They take it to a friendly drug dealer's house hoping to make some money from it.

It's Guy Fawkes Day so fireworks are exploding over the city skyline. No one particularly notices at first that things are also falling from the sky. Soon “it's raining Gollums!” over the estate and the gang and some local drug barons are attempting to defeat them. The gang leader Moses (John Boyega) is suddenly thrust into a situation that requires a level head and a sense of responsibility to protecting his gang and turf. The beast they left hanging in the Ron (Nick Frost), the drug dealers weed room looks “like a monkey f**ked a fish”. Apparently it's drawing the rest of the dark, hairy aliens with phosphorescent purple teeth to it wrecking havoc along the way. They involve the nurse Sam (Jodie Whittaker) who they previously mugged to care for some nasty wounds involved in their battles. The gangs had armed themselves with fireworks, bats, knives and a samurai sword to run the creatures out of the block. But they quickly realize they are not as easy to kill as the first one.

Written and directed by Joe Cornish (who wrote the upcoming Adventures of Tintin and played Bob in Hot Fuzz) starts out the movie like a dark drama with the mugging. When things start falling out the sky we are watching these kids talking their usual street jargon while killing aliens. This is not the US and they military doesn't come to the rescue. The action and bumps in the night will keep you off balance, and the dialogue sounds like it's improvised as the kids talk trash between themselves and a rival drug king thinking the aliens are another gang coming to the territory. There's a bit of the slacker humor of Shaun of the Dead and Hot Fuzz. It's surprising and a differently amusing take on a typical aliens invading the world premise.
(Review by reesa)

Email ThisBlogThis!Share to TwitterShare to FacebookShare to Pinterest
Labels: Attack the Block review