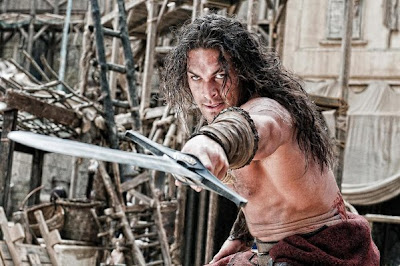 Conan is back and just not on late night TV. This is a remake of Arnold Schwarzenegger's sword and muscle epic starring the Game of Thornes barbarian king Jason Momoa. While Momoa doesn't have the Mr. Universe cut like Arnold, he is impressively built and at 6'5” towers over his predecessor. Armed with cheesy dialogue just like the first movie, director Marcus Nispel (Pathfinder and Friday the 13th) creates the Saturday afternoon escape.

Conan is born on the battlefield with his father Corin (Ron Perlman) cutting him out of his warrior mother's womb. The Cimmerian leader sends out the young men of the village for their rite of passage test. The boys are attacked by a group of Native American looking raiders who growl like animals, the other boys run, but Conan kicks @ss and brings back the heads to his father. Corin realizes it's time to make the boy a sword, but before he can wield it he must understand it. Later the village is attacked by the ruthless Khalar Zym (Stephen Lang) who has been collecting the scattered pieces of the Mask made by necromancers from the skulls of fallen kings and fed with the blood of their daughters. The resulting power caused chaos in the world until they were eventually overthrown. The pieces were distributed to the tribes who were supposed to hide them so they will not be assembled again. Zym manages to collect them all with the help of his witch daughter Marique (Rose McGowan). He wants to become a god and resurrect his wife who was a burned for being an evil sorcerer. After Conan father is murdered and his village burned he spends his life wandering the ends of the earth searching for the elusive Zym who with the completed mask needs the “pure blood” a direct descendant of the necromancers whose blood is needed to activate the mask.

Filled with comic style lines recited like a weekly TV show don't expect much in the way of cutting edge sword and sorcery. The art direction is interesting with the fantasy world of huge ancient buildings and rock formations that are reminiscent of the work of Frank Frazetta. Costumes are like Hercules and Xena the Warrior Princess with various mixes of middle age fairs. The action sequences are what makes the movie interesting. Extremely violent and inventive Momoa doesn't disappoint with his skills. Some of the retribution that Conan exacts are surprisingly amusing and will make one applaud their comeuppance.

Rachel Nichols plays Tamara the beautiful monk who doesn't realize that she is the pure blood. She meets Conan when the head monk had her spirited away when Zym arrives. She effectively battles Zym's henchmen along side Conan who is still putting the pieces of why Zym wants her. Their banter is very contemporary (to make it understandable to the target audience). The female protagonist is able to handle herself rather than the usual half dressed damsel in distress. The little adventures that Conan has to endure to find Zym, rescue Tamara and basically save the world is like a video game. He meets each of Zym's warriors that had helped kill his father and each gets a battle so he can move to the next level. An easy afternoon at the movie, but if it comes in 2D opt for that because the extra charge on this film will make you more angry than Conan.
(Review by reesa)

Email ThisBlogThis!Share to TwitterShare to FacebookShare to Pinterest
Labels: Conan the Barbarian review